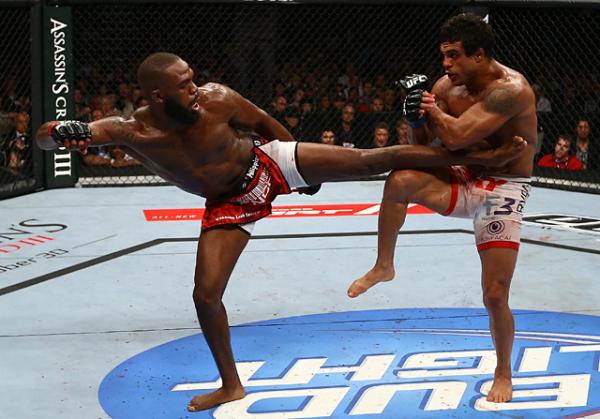 Did the UFC knowingly allow a juiced-up fighter to compete at UFC 152? Please share your thoughts below. | Al Bello/Getty


Sept. 22, 2012 was a night that saw Ultimate Fighting Championship light heavyweight champion Jon Jones overcome an early submission attempt by Vitor Belfort to secure his fourth defense of his title at UFC 152. Almost three years to the day after that eventful evening in Toronto, Deadspin.com ran a story by Josh Gross stating that the promotion was receiving test results from an anti-aging clinic in Las Vegas that detailed irregular results from Belfort in the weeks leading up to the bout.

The allegations that Jones was unaware of the promotion having knowledge that his opponent, a fighter twice nabbed in regulatory dragnets with performance-enhancing drugs in his system, was likely using testosterone and allowed the fight to go on as scheduled should be a shocking detail. Unfortunately, as we have witnessed time and again in this sport, the crazy, wacky and unfathomable seem to happen with disappointing regularity.

The fact that these test were sent out to a smorgasbord of fighters and managers by the UFC themselves is just another instance of the zany reality in which we operate. A follow up email from Zuffa lawyers asking the recipients to delete the emails seems laughable in hindsight, but for three years they must have thought it worked.

Related » Gross Discusses the Report with Breen on ‘Press Row’


The UFC has contracted with the United States Anti-Doping Agency to provide year-round out-of-competition testing for their entire roster. A cavalcade of bad press surrounding the hall passes being granted by athletic commissions allowing fighters to use testosterone -- the base compound for most anabolic steroids -- and the company’s apparent concurrence with their issuance finally steered the promotion to change course. The people that had cheered therapeutic-use exemptions stated that they hated TUEs and said it was up to the athletic commissions to regulate them had finally had enough and set in motion plans to develop one of, if not, the most stringent league-wide testing protocols in the sports world.

That is probably a very good thing right now.

Not that USADA is without their warts (read Thomas Hauser’s story about the Floyd Mayweather pre-fight IV scandal if you want to inform yourself) but they are an independent organization with a track record of chasing down cheats like Lance Armstrong. They are contracted by the UFC to handle all testing and will be the ones notifying fighters of their results. It is completely out of the hands of the UFC. It is the antithesis of what allegedly happened with Belfort in 2012.

I have always said the best argument for doing a comprehensive drug testing program like the one they have engaged in with USADA was the fact that the UFC is a very valuable business property and the liability of having juiced-up fighters in the Octagon could be a potential company killer.

Imagine a guy on a TUE or just taking PEDs on his own injuring or killing another fighter. It doesn’t take a rocket surgeon to figure out that a scenario like that would not be conducive to the long-term health of the promotion. Well, add to that hypothetical allegations that the organization was receiving test results from an anti-aging clinic unaffiliated with the athletic commission and had been given results that were flagged as “high” for free testosterone and then they let said fighter compete.

Do you see where I’m going with this?

It is actually pretty amazing this fight was allowed to take place when you consider the test results were accidentally disseminated. It is baffling really.

Liability, liability, liability. I can’t say that word enough. How do you think Jon Jones feels about his promoter having even the slightest inkling his opponent might have had an unfair advantage and doing nothing to inform him about it?

I’m not a lawyer but that won’t stop me from playing one on the Internet. If I’m Jones, I might want to figure out what kind of options I have. I can’t imagine too many fighters would be OK with signing a bout agreement only to find out the entity contracting them to fight allegedly had knowledge of their opponent using PEDs.

This is serious, serious stuff.

I know it isn’t fun to talk about for fans and I am damn sure it isn’t something the UFC was hoping to be talking about as they head into what should be an amazing fourth quarter of the year. The problem is, this seems to be a legitimate issue that is screaming out for some answers.


Another test came up short this weekend. Bellator MMA held its inaugural “Dynamite” event in San Jose, Calif., Saturday night, which featured Tito Ortiz fighting for a belt in 2015 (yeah, that happened), a four-man light heavyweight tournament as well as three kickboxing matches.

While the card drew north of 11,000 spectators to the SAP Center, only 800,000 or so viewers tuned into Spike TV to watch the spectacle. That had to be a disappointing number considering Ortiz had drawn about one million more viewers his last time out against Stephan Bonnar.

One problem fans have harped on was their dislike of mixing combat sports. I can tell you it was absolute chaos in the building when the action shifted from cage to ring or vice versa. Commission members, production crews and media were all scrambling from one platform to the other in hectic fashion. Don’t even get me started on the post-lim fights when there were contests going on in both ring and cage simultaneously. It was a mess.

Bellator President Scott Coker seems married to the idea of doing these shows on a yearly basis at the very least. Fans who are opposed to the mixed shows might have a glimmer of hope with Glory doing exceedingly poor numbers over recent months. There might not be a kickboxing promotion to pair with the Viacom-owned Bellator this time next year.

But what they might have is an Asian MMA partner.

The return of Fedor Emelianenko had been teased for more than a month and many pundits were convinced he was finally headed to the UFC. That dream came crashing to earth Saturday night when it was announced that Spike TV had acquired the rights to broadcast a new Japanese-based mixed martial arts event that makes its debut on New Year’s Eve with “The Last Emperor” as their headliner.

While it seems former Pride Fighting Championships boss Nobuyuki Sakakibara and crew has secured funding in hopes of resurrecting Japanese MMA from the ruins, one has to wonder if there are enough people interested to make their efforts worthwhile. It is a long shot at best, but at the very least it was mission accomplished for Bellator and Spike TV. They didn’t have to spend a dime to succeed in keeping Fedor out of the Octagon.

If Emelianenko is determined to stick around for a year or two, I suspect the boys in Las Vegas will have another chance to land the big fish that has always seemed to wiggle off their line.

Greg Savage is the executive editor of Sherdog.com and can be reached via email or on Twitter @TheSavageTruth.