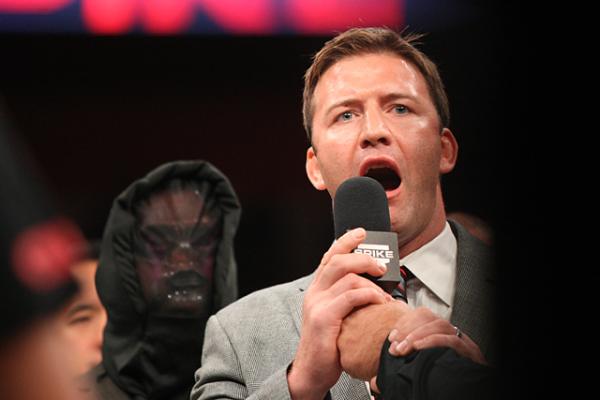 Stephan Bonnar has never been known to back down from a fight. | Photo: Keith Mills/Sherdog.com


The proving grounds came in odd places; on a schoolyard teeter-totter, where he intervened after seeing a few kids tossing around a smaller schoolmate; on a gravel parking lot, where a 20-something fool made the mistake of sizing up his lithe, skinny teen-age frame and paid for it painfully; in the family kitchen, where he left one older sibling splayed out and unconscious; and seven years later, on a bedroom floor, where he left another older brother a bloody pulp.

Stephan Bonnar’s fighting acumen came in increments, and the accumulation made him who he is today. “The American Psycho” promises everything he has ever faced will spill out when he fights fellow Ultimate Fighting Championship Hall of Famer Tito Ortiz in the Bellator 131 main event on Saturday at the Valley View Casino Center in San Diego. Making his Bellator MMA debut, the 37-year-old Bonnar is not reaching for dusty, disused joints that have not been tested in years. He feels revitalized and grateful for the chance to plant Ortiz, 39, on his rear end.

However, this budding rivalry runs a little deeper than that. It goes back to the years when Bonnar got stomped in his own home and to all the little occasions when he felt compelled to do something when no one else would, when he felt almost obligated to be the guy who stepped forward into an unknown predicament because the situation demanded it.

When Bonnar steps into the cage, he will not just see Ortiz. He will see Brent and Johnny; he will see those kids shoving around a smaller counterpart who tried getting on a preschool teeter-totter and eventually became his lifelong friend. He will see the guy at the rock concert who could not leave well enough alone and was made taste his own blood. In Bonnar’s mind, Ortiz represents all those takers who never gave back, the bullies who stood in the way and ran when someone like him pushed back. To underestimate him is to empower him.

“I’ve known Stephan for 35 years, and to anyone who knows him, they know he’s a great guy,” said Tom Scully, the kid Bonnar rescued from the teeter-totter gang many years ago. “I think Stephan likes to see himself as the a--hole to a--holes. These people who sing their own praises all of the time, like Tito Ortiz, who believe it -- those are the ones that really piss him off. Stephan is the type to settle the talk inside the cage. Once it’s done, it’s done. I read somewhere Tito said that Stephan was giving out blowjobs at the UFC, and Stephan was like, ‘OK, Tito. That’s fine.’ He’s going to get in the cage with Stephan, and he’ll find out.

“He has an I’ll-show-you attitude,’” Scully added. “People push back on him, [and] he comes back with more. The Stephan Bonnar I know would never start a fight, but he finishes them. He’s always finished them.”

There is also some restoration going on with Bonnar, who is fully aware many MMA fans have good memories. They know his last foray into a high-profile fight was his first-round loss to Anderson Silva at UFC 153 on Oct. 13, 2012. Soon after, Bonnar tested positive for the anabolic steroid Drostanolone. “I guess there is some redemption involved here,” Bonnar said, “but I’m done giving a s---. I always wanted people to like me. I made sure I said the right things. I wanted to come across in a certain way and I want to tell it like it is. I don’t give a s---. I had a lot of people turn on me after the Silva fight without knowing the facts. You put yourself through so much in the sport, so many surgeries, close to 20 surgeries. There were so many people that turned on me and hated me, so to hell with trying to get everyone to like me. I’m going to be myself, which is a troublemaker, a smartass, and the s--- I pulled with [Ortiz’s ex-wife] Jenna [Jameson] when they announced the fight -- that’s me.

“I’m not going to get people to like me,” he added. “In other sports, you see these athletes trying to be right and proper, but the minute someone says something, it’s all over the place and the guy has to come out with a bulls--- apology. That’s not me. I’m so sick of it. It’s refreshing to be in the spotlight again and get the opportunity to speak my mind and say, ‘I don’t like Tito Ortiz, I think he’s an [expletive] a--hole.’ I’m so thankful to be locked in a cage with him.” 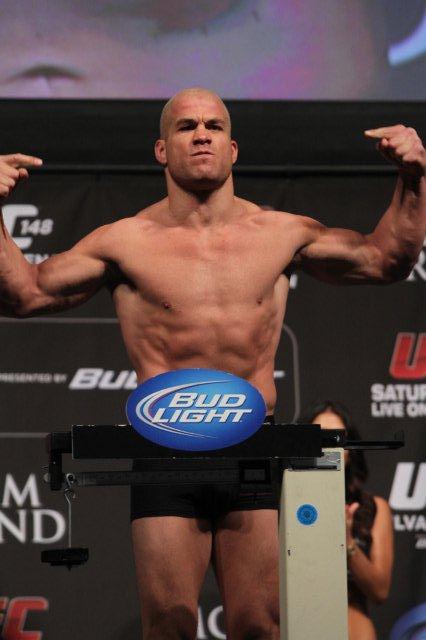 Photo: Sherdog.com
Ortiz has drawn the ire of many.
The incubator was a house with three rambunctious boys in Munster, Ind. Stephan was the youngest and Johnny the oldest, with Brent in between. The two older boys gave Stephan no breaks.

The Bonnars were all large, with genetics from their mother’s side, the Michutas. Stephan’s maternal grandfather, John Michuta, was a 6-foot-2, 207-pound star right tackle for the University of Notre Dame in the mid-1930s who once won the heavyweight class in the Detroit Golden Gloves -- the same year a young man named Joe Louis won the light heavyweight division. Stephan’s paternal grandfather garnered a couple Purple Hearts for his service in the Pacific during World War II.

“So I have some ass kickers on both sides,” Bonnar said.

Johnny and Brent built quite an arsenal of achievements, a pile of which left a lot to aspire to for their youngest brother. Johnny was highly intelligent and a baseball star. Brent was the alpha male, a 220-pound starting middle linebacker for the high school football team, accomplished state-caliber wrestler and revered by everyone. Brent was the real life subject in the Glenn Danzig song “Mother” -- an angry young man so full of boundless rage that you would have to watch how you looked at him. Even today, when Stephan fights, Brent nervously paces and wears a glare as if he is the one in the cage. Then there was Stephan, a 170-pound beanpole, part-time punching bag and reluctant martyr each time the older boys needed to release some steam.

“They kicked my ass on a regular basis, so at a young age, my goal was to become a ninja,” said Bonnar, who graduated from Purdue University with a degree in sports management. “I would come home if I did something wrong at school and get my ass whipped from my father with the belt and then get into a fight with one of my brothers. That was our household growing up. That was like a typical day. We were always fighting. It’s probably why I was always fascinated by martial arts; and then there was pee-wee wrestling and high school wrestling. Around 12, I found a nearby tae kwon do place a few towns over. I thought that would help.”

Problem one was solved Bonnar’s freshman year of high school. Johnny, three years older, was a senior and found his young brother a different foil for his frustrations one afternoon. Early training for Ortiz and those like him began here, in the family kitchen, and then gradually rose to the boys’ bedroom.

“Johnny came home all pissed off from school and was eating a burrito with cottage cheese,” Bonnar said. “He told me to put the cottage cheese away. I told him I was using it. He smacked it, and it went all over me. He started swinging at me, and I took him down. I didn’t even know how to choke properly, but I started choking him out. He was gasping for air, knocking a garbage can over.

“Garbage spilled out [and] Johnny was flailing around when he picked up a bottle and tried to swing back over his head as I’m choking him out,” he added. “I thought he was going to break the bottle and stab me. I got a good squeeze on and I kept squeezing until he went unconscious. My dad comes into the kitchen, garbage everywhere, and there’s Johnny lying on the floor. Dad was proud of me. I was 14 and Johnny was 17, and I got him.”

It took him seven years before he caught up to Brent.

“You have to understand something: Growing up, everyone was afraid of Brent. He was probably the toughest kid in the school,” Bonnar said. “It took a while for him -- he always had my number. That changed during Christmas break my junior year in college. By then, I was lifting and training. I wasn’t a little kid people could push around anymore.

“So I was on the phone with my girlfriend and I’m all stretched out lying on the bed,” he added. “Brent kept coming in and grabbing the phone and saying how much her friend was so much hotter than her. He was just being annoying. She told me to stop putting Brent on the phone, and I told her, ‘He just keeps grabbing the phone.’ Brent barged in again and I told him to get out: ‘She doesn’t want to talk to you. You’re being a pest.’ I pushed him out and closed the door.”

Within seconds, shards of wood were flying at Bonnar, and right behind them was the enraged, crimson-faced Brent flying at his younger brother almost in slow motion, assuring his claim as the household’s alpha badass. This time, however, a new sheriff was about to establish himself.

“Brent comes at me swinging and I had barely enough time to roll off the bed and drop him in a double-leg and just pound him,” Bonnar said. “Brent still got the last laugh, because my parents came in and started dragging me off. Brent was bloody, and I told my parents, ‘I’m done, don’t worry.’”

Suddenly, like something out of a horror movie scene in which the villain refuses to die, Brent and his bloody face surged at him, reaching out to grab his testicles.

“And Brent has a strong [expletive] grip,” Bonnar said. “I gave him a nice slap to the head. He let go. I got in my car and went back to school. I came back home a few weeks later and it was like nothing happened. From then on, our relationship changed -- I got Brent’s respect -- but beating my brothers made me feel like I could do anything.”

Finish Reading » “I totally ruined everything. Think about this: Why risk my job with the UFC? I had health insurance, a great job with a great company, doing TV work on a regular basis. Life was awesome. I [expletive] it all up. Life was handed to me on a silver platter and I dropped a deuce on it. That’s me, too. I’m a [expletive] up. I’ve gotten in a lot of trouble in my life, and I do s--- like that.”
« Previous Full Episode: ‘Unrivaled -- Tito Ortiz’ Next Pictures: ‘Ill Will’ in Camp for Michael Chandler Rematch »