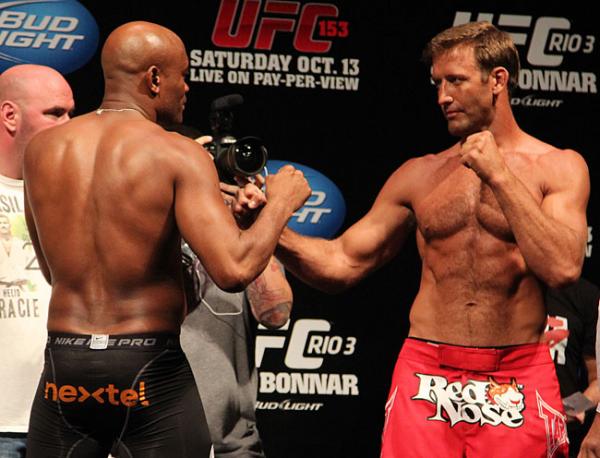 
Outside the Bonnar home, there were already some, like Scully, who had taken notice. The two have been close ever since they were 3 years old.

“One of my favorite Stephan stories is when we were in high school,” Scully said. “I’m a freshman and Stephan’s a sophomore and we had a friend’s parent drop us off at a Scorpions concert. We were kids and snuck into the pavilion area. There were guys behind us telling us the seats weren’t ours. I gave one guy a snide remark, and the guy, who I’d say was around 23, maybe 25, grabs my hair and begins pulling me back over my seat.”

Bonnar intervened and put the guy in a wrist lock. He may have been tall, but he was also reed thin. It was easy to see Bonnar was 15, possibly 16. That did not matter to the guys sitting behind them.

“I’ll see you after the concert, buddy,” one blurted out.

During Scorpions’ “Rock You like a Hurricane,” the same man pointed to Bonnar and his friends and dragged his finger across his neck, implying he was going to slit Bonnar’s throat.

“I was like, ‘Holy s---, this guy is serious,’ so the concert ends and they’re walking out and the guy comes out and challenges Stephan,” Scully said. “They’re going to fight, but the guy was like, ‘Hold on, I have to use the bathroom before we fight.’ Stephan was like, ‘No, I’m outta here,’ so the guy says, ‘OK, buddy, when I’m done kicking the s--- out of you, I’m going to ask you what it’s like to be so tough, right after I get done pissing on your face.’”

It was not a fight; it was a beating. Bonnar took out the older guy with three uppercuts, a kick and a knee. It was done in an instant.

“These guys didn’t know Stephan was a 15-year-old kid,” said Scully, who has a business relationship with the UFC. “The guy tried throwing a punch, slipped on the gravel and Stephan grabbed him by the back of the head, kneed him and gave him one more kick and left him in a bloody heap.”

Then Stephan bent down and leaned into his victim’s face and said, “That’s what it’s like to be tough.”


Bonnar would fill his time in the Purdue computer lab looking up fights and becoming hooked on MMA after watching Vitor Belfort burst on the scene and destroy Dave “Tank” Abbott.

“That got me,” Bonnar said. “I was like, ‘Holy s---. I love UFC.’ I began looking up Belfort and saw he was trained by Carlson Gracie in Chicago. I was doing work in Chicago, and that got me excited. When I found Gracie’s school in Chicago Heights, right from there I put the gi on and wore the white belt with all of these little Brazilians. I wanted to be bigger and stronger, and they’re wrapping me up in my gi and they’re choking me unconscious. I was like ‘Wow, this stuff is awesome.’ After I graduated from Purdue, I moved to Chicago and I wanted to become a black belt.”

Bonnar later found a local MMA event in which to compete, won and began building from there. It led him to Season 1 of “The Ultimate Fighter” and a war with Forrest Griffin that helped propel the UFC to mainstream acceptance. Forever linked to the historic slugfest, Bonnar went on to win eight of his next 14 fights inside the Octagon, with five of those losses to reigning or former UFC champions: Griffin in their rematch, Silva, Rashad Evans, Jon Jones and Mark Coleman.

“
I don’t care about getting
a title or anything. Make
me bloody. That brings
out the best in me.

Bonnar was scuba diving and lobster fishing in Sebastian, Fla., when he got the short-notice call to fight Silva in the fall of 2012. He had been in Florida preparing World Wrestling Entertainment superstar Dave Bautista for his mixed martial arts debut. To gain a little size, Bonnar got a little help.

“I wanted to get bigger and stronger, so I did a cycle of steroids,” he said. “I did a lot of lifting to get Dave ready. I didn’t have to worry about making weight, cardio or drug tests. I wanted to become bigger and stronger and did steroids with that goal in mind. I wanted to set some new [personal records]. I was 35, 36 and thought this was it. Those were my goals. Here’s what happened: I’m on a cycle of steroids and spent two weeks in Florida to help ‘Batista’ get ready for his fight. I didn’t bring the steroids with me. I had stopped right after that, and I got the call to fight Anderson Silva. The steroid I tested for, Drostanolone, was stuck in my system for four to six weeks. I’m not dumb. I had three weeks to train for that fight and 35, 40 pounds to lose, and you really think after that I’m going to take something that’s going to be detectable?

“I just said [expletive] it,” Bonnar added. “I’m going to go in and shock the world. That’s what was going through my head; but it showed up. I totally ruined everything. Think about this: Why risk my job with the UFC? I had health insurance, a great job with a great company, doing TV work on a regular basis. Life was awesome. I [expletive] it all up. Life was handed to me on a silver platter and I dropped a deuce on it. That’s me, too. I’m a [expletive] up. I’ve gotten in a lot of trouble in my life, and I do s--- like that.”

All was lost, in Bonnar’s mind, after the Silva controversy.

“It didn’t work out,” Bonnar said. “The whole Silva thing completely blew up in my face and turned out to be a big-time learning experience. Who knows? This Ortiz fight could totally go wrong, but if I didn’t answer the door and take this opportunity, I’d be kicking myself. I asked myself if I was too old to do this, too old to come back.”

THE ROOT OF HATE


Bonnar claims his dislike for Ortiz stretches back to 1999, after “The Huntington Beach Bad Boy” beat Guy Mezger at UFC 19. Ortiz stopped Mezger on first-round punches, went over to his corner and started flipping off his trainer, Ken Shamrock. Bonnar became irate.

“How disrespectful, and then Ortiz won a split decision gift against Vitor Belfort [at UFC 51] and paraded around the place like he just destroyed him and then started disrespecting Ken again, calling him Ken Slamc---,” Bonnar said. “I just know a lot of people who know Ortiz, and you don’t know how many people have the same reaction when his name comes up: ‘F that guy,’ they say. A few years ago, I asked Justin McCully, who was Tito’s guy for a long time, about Tito, who had retired then, and he looks at me out of the corner of his eye and says, ‘Man, F that guy.’ Tito’s screwed over so many guys, and I don’t want to air people’s dirty laundry about all the people he’s stiffed in so many ways.

“It’s typical Tito Ortiz,” he added. “Tito Ortiz still thinks he’s Tito Ortiz. He’s done. He’s over. People who have been there for him, he’s not there for. That’s why I don’t like the guy. He’s like his own biggest fan; he calls himself an icon, and it makes me sick. I’m the complete opposite.”

Bonnar intends to uphold the unwritten warrior’s code, the one that mandates bitter rivals shake hands after they battle. He took this fight knowing he could be a tool for Ortiz to climb higher in Bellator. Ortiz may think he knows “The American Psycho.” Bonnar disagrees.

“Ortiz needs to win to parlay that into a bigger fight; my motivation is to put on a great fight. There’s no pressure on me. I don’t give a damn,” he said. “I don’t care about getting a title or anything. Make me bloody. That brings out the best in me. I just want to beat him up.”
« Previous Full Episode: ‘Unrivaled -- Tito Ortiz’ Next Pictures: ‘Ill Will’ in Camp for Michael Chandler Rematch »