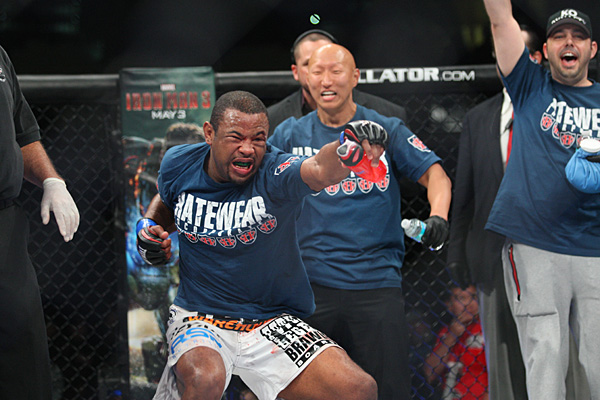 
Bellator MMA could not have chosen a more unlikely title contender.

With three wins and a no-contest in his last 11 appearances, Joey Beltran will challenge light heavyweight champion Emanuel Newton for the 205-pound crown in the Bellator 124 headliner on Friday at the Compuware Arena in Plymouth Township, Mich. The notoriously durable 32-year-old “Mexecutioner” has not posted consecutive victories in more than four years.

Newton has surfaced as one of the sport’s top light heavyweights. He will enter his latest title defense on a five-fight winning streak that includes a pair of victories over onetime Strikeforce champion Muhammed Lawal. The Reign MMA-Kings MMA representative last appeared at Bellator 113 in March, when he took a split decision from Attila Vegh and avenged a 2012 defeat to the American Top Team-trained Slovakian. Newton, 30, has pieced together an outstanding 6-1 record since arriving in Bellator some two years ago.

Beltran last competed at Bellator 116 in April, when he sent former International Fight League titleholder Vladimir Matyushenko into retirement with a third-round north-south choke. The win halted a two-fight losing streak for the Alliance MMA export and gave him his first submission since June 2007. Beltran, a rugged clinch fighter who has shuttled between the light heavyweight and heavyweight divisions throughout his career, owns victories over Houston Alexander, 2007 Abu Dhabi Combat Club Submission Wrestling World Championships silver medalist Rolles Gracie and former King of the Cage Canada champion Tim Hague.

In addition to the Newton-Beltran main event, here is what to watch for at Bellator 124:

MEANS TO AN END


Liam McGeary fancies himself a champion in waiting.

The unbeaten 6-foot-6 Englishman can take another serious step in the direction of his end goal when he locks horns with Kelly Anundson in the 2014 Bellator Summer Series light heavyweight tournament final. McGeary, 31, advanced in the eight-man draw with consecutive first-round stoppages against Mike Mucitelli and Egidijus Valavicius. A Renzo Gracie disciple, he has finished all eight of his wins, five of them inside 91 seconds.

McGeary will have his hands full with Anundson, who was a two-time NCAA All-American wrestler at Newberry College in South Carolina. The 30-year-old American Top Team representative relies heavily on takedowns, ground-and-pound and a polished submission game from top position. 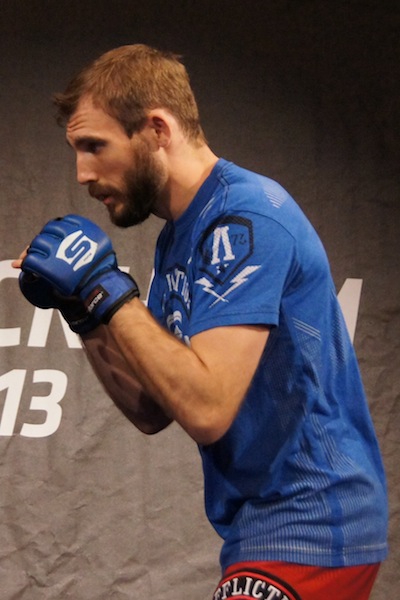 Photo: Ryan O'Leary/Sherdog.com
Couture has won two straight.
The business relationship between Bellator President Scott Coker and Ryan Couture dates back to their days together in Strikeforce.

Couture, the son of UFC hall of famer Randy Couture, will return to the major mixed martial arts scene against King of the Cage veteran John Schulz. The 32-year-old has rattled off two straight wins since being released by the Ultimate Fighting Championship following a unanimous decision defeat to Serra-Longo Fight Team standout Al Iaquinta at UFC 164 a little more than a year ago. Couture made his most recent stop under the BattleGrounds MMA banner in May, when he submitted Shakir McKillip with a second-round rear-naked choke.

Schulz, 38, has lost two of three bouts since starting his career 4-0. The five men he has beaten own a cumulative record of 17-86.

MEETIN’ OF THE UNBEATENS

The 27-year-old Ivy Leaguer will put his 14-0-1 record on the line against Shamir Garcia, as he transitions from regional juggernaut to immediate person of interest in Bellator’s top-heavy middleweight division. Reiter wrestled collegiately at the University of Pennsylvania, where he once competed at 285 pounds. He has notched four wins in a row since his June 2013 encounter with Marcos Rogerio de Lima ended in a three-round draw at an Inka Fighting Championship event in Peru. Reiter prefers close-quarters combat, where he can initiate clinches and takedowns, and has delivered nine of his 14 victories by knockout, technical knockout or submission.

An undefeated Total Warrior Combat champion, Garcia has yet to go the distance in six professional appearances.


L.C. Davis finds himself in the midst of a career resurgence.

Once a staple of the World Extreme Cagefighting organization, Davis has won five of his past six fights and will ride his newfound momentum into a showdown with Nova Uniao’s Zeilton Rodrigues. The 33-year-old made a successful Bellator MMA debut at Bellator 113 in March, when he submitted Taurean Bogguess with a first-round guillotine choke. A disciple of UFC hall of famer Pat Miletich, Davis wrestled collegiately at Labette Community College and Missouri Valley College. He now serves as an instructor at an American Top Team affiliate in Lenexa, Kan.

A Shooto Americas mainstay, Rordigues will carry a six-fight winning streak into his first appearance inside the Bellator cage. The 32-year-old Brazilian last fought at Shooto Brazil 39 in May, when he knocked out Claudio Rocha in the first round at the Nilson Nelson Gymnasium in Brasilia, Brazil.