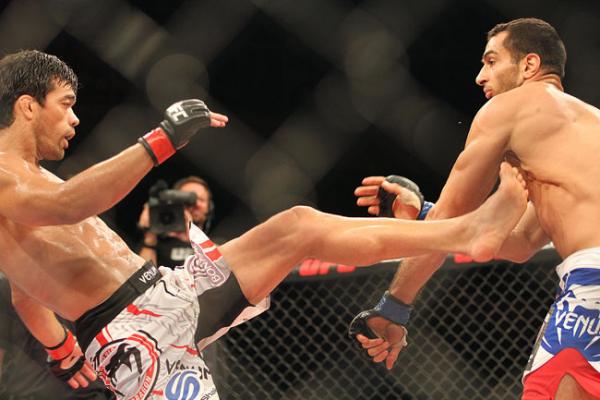 
Those who say that “it’s not the destination, it’s the journey” have obviously never had to sit through an epic night of decisions on a UFC Fight Night card.

When you consider that it took approximately five hours to arrive at Saturday’s highly anticipated UFC Fight Night 36 headliner between Lyoto Machida and Gegard Mousasi at the Arena Jaragua in Jaragua do Sul, Brazil, it is understandable that some people were a little bit grumpy by night’s end. After all, even the most rapt attention span can only hold up for so long, and when you are trying to sift through a revolving door of “Ultimate Fighter” alums, short-notice fill-ins and anonymous free agents along the way, it gets hard to differentiate between one bout and the next.

That was the story of UFC Fight Night 36, which in the grand tradition of UFC 169 before it, served up a multi-course appetizer that left more than a few observers feeling bloated long before Machida and Mousasi entered the Octagon. From the start, we all knew the event was top-heavy; Machida-Mousasi and Ronaldo Souza-Francis Carmont were worth staying up late for, but everything else was largely dispensable.

Still, despite a technical chess match between the two main event combatants, it seems that many would have appreciated some plain old blood-and-guts checkers instead. If you signed on to watch Machida-Mousasi, you should have known better.

While many of the fights were panned for going the distance -- and rightly so -- the middleweight feature was the type of bout that required a full 25 minutes to unfold. Both Machida and Mousasi are capable of the spectacular -- one need only to flash back to October to recall “The Dragon’s” brutal head kick knockout of Mark Munoz at UFC Fight Night 30 -- but they are also cerebral strategists who are highly unlikely to make a miscue that puts them on another’s highlight reel.

In the end, it was Machida who made most of the right moves. His lateral movement and feints were on point, and while Mousasi was not the type to run headlong into a counter, the Brazilian still found his fair share of success landing a variety of offense. In round two, Machida even rocked Mousasi with a head kick that might have dropped a lesser man.

At one point in the fight, it appeared that a look of frustration briefly registered on the former Strikeforce champion’s normally expressionless face. For Machida, that was an accomplishment in itself.

What kept things interesting, however, was that it never completely felt like Mousasi was out of it. As Machida inched ahead on the scorecards, the possibility remained that Mousasi could find a miniscule opening to exploit. In the end, “The Dreamcatcher” had his moments, but he was never able to crack the Machida code.

“He’s a great fighter, a real champ,” Machida said. “I wanted to finish it in a different way. I couldn’t, but I was able to get the points.”

The last part of that quote might have been the most damning in the eyes of Machida’s detractors. To them, it probably suggests he was content to win the scorecards all along. However, Machida has already made subtle alterations to his approach at 185 pounds.

It was more obvious against Munoz, but the Brazilian again on Saturday took far more opportunities to press the action rather than simply waiting to counter. The bursts of aggression were short and sporadic, but they were there. Machida has always been a fighter who carefully picks his spots. The fact that he was unable to finish is more of a testament to Mousasi’s skill and durability than an indictment of Machida’s killer instinct or lack thereof.

“Machida continues to evolve,” former Ultimate Fighting Championship bantamweight king Dominick Cruz said on Fox Sports Live. “He attempted three takedowns, and he never goes for takedowns. It’s very difficult to fight him. He does everything just right. He uses kicks, then jabs and can switch stances. He fights in a southpaw stance but circles to the left, which is completely wrong, but it works.”

During his run to becoming UFC light heavyweight champion, Machida was viewed as an unsolvable riddle. As a few losses were added to his ledger and the mystique faded, he was downgraded to simply being a tough matchup. Now Machida is trending upward. If he is not totally reinvented at 185 pounds, he is at the very least improved. Just do not expect him to suddenly transform into Chris Leben. Eating punches in order to land a few of his own has never been Machida’s style.

At UFC Fight Night 36, very few fighters on the card did anything to stand out from the crowd. At times it felt like the undercard came straight off the UFC assembly line, with each bout instantly forgettable as soon as the judges’ ruling was announced.

There is no getting around the fact that some fights are going to be just plain boring. It just so happens that 2014 has begun with an unseemly amount of nondescript affairs. UFC Fight Night 36 certainly had its share, but Machida-Mousasi was not one of them.

In an era of mass MMA production, Machida stands out. What he does and how he does it are so different from most of what is out there. Even when he is unable to deliver the spectacular, he is almost always worth watching.