For the second time in eight months, a last-minute injury has obstructed Conor McGregor’s shot at a title.

Less than a year ago, it was Jose Aldo who was forced to pull out of his featherweight title defense due to a rib injury. This time around, it was Rafael dos Anjos who had to bow out of defending his lightweight title after breaking his foot. Now, McGregor will make his welterweight debut -- no title on the line -- against late substitute Nate Diaz in the UFC 196 main event on Saturday at the MGM Grand Garden Arena in Las Vegas. This will be McGregor’s first fight of the year; he was last in action in December, when he put on a dominant drubbing of longtime featherweight king Aldo. The Irishman is coming off of a breakout 2015 campaign, the first year he fought more than twice since joining the Ultimate Fighting Championship.

Diaz has been relatively inactive recently, fighting only twice in the last two calendar years. The longtime Zuffa veteran and “The Ultimate Fighter 5” winner is nearing his nine-year anniversary in the UFC, a career that has seen several stints of varying successes and failures. Since challenging for Benson Henderson’s lightweight title in 2012, Diaz has gone 2-2, suffering his first and only TKO loss along the way. He was last in the Octagon in December, only a week after McGregor iced Aldo, taking a hard-fought decision over Michael Johnson. Immediately after the fight, Diaz unleashed an expletive-filled challenge to McGregor, which made the Cesar Gracie disciple a natural replacement for the injured dos Anjos.

This is an intriguing fight, for both the out-of-cage verbal exchanges and the potential exchanges in the actual fight. Let us see what the Tale of the Tape says about it:

At the forefront of the match is an interesting anthropometric clash. This will be only the second time McGregor has fought a taller opponent and the first time he will fight someone with a reach advantage in the UFC. As it will likely be a strictly standup affair, these advantages for Diaz will play an important role in his ability to get the win. It is also worth pointing out that Diaz has fought at welterweight four times already, going 2-2. This is McGregor’s first foray above 155 pounds. How he deals with a larger opponent will be telling, especially given his lofty career ambitions.

Though McGregor is the more ubiquitous personality and known commodity in the MMA world, Diaz is the more experienced fighter. He made his professional debut at the tender age of 19, and all but two of his fights have been on the biggest stages. This is only the third time the Stockton, California, native has fought someone younger than him. As such, he has logged over three and a half more hours in the Octagon than his Irish foe. Part of that disparity, however, is due to the difference in finishing rates and the fact that Diaz has lost a whole lot more. All but one of his losses went to the judges. “Notorious” has never lost in the UFC, and he has finished every opponent except Max Holloway, averaging five and a half minutes per fight. Diaz’s average fight takes nearly twice as long.

Although the numbers show no discernible layoff-related advantage since their last fights were only a week apart, there are two important caveats. First, Diaz was in a much tougher fight in his last outing. Although he suffered no serious injuries, he was still hit a whole lot more than McGregor, who barely broke a sweat in the 13-second duration. Second, McGregor had been training for a fight this entire time, while Diaz was reportedly training for a triathlon. While that is better than not training at all, it is certainly more advantageous for a fighter to be in a fight camp than to be training for a running, swimming and biking competition.

All things considered, this should be a compelling standup battle. Here is what the striking numbers tell us: 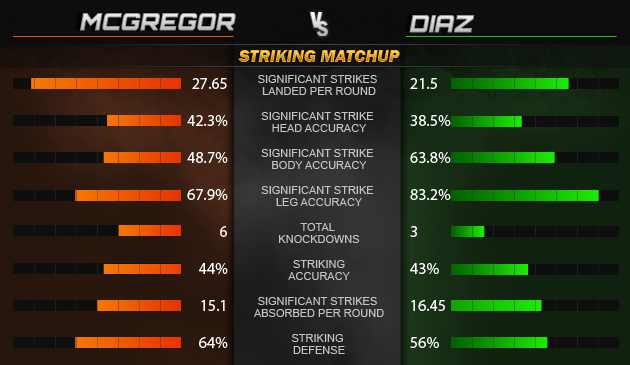 There are a number of similarities between McGregor and Diaz in their statistics and style. There are, however, some key differences to note.

McGregor is a deceptively crafty puncher. Though he is a natural pressure fighter who uses volume and reach to herd fighters into the fence, he is also a smooth, calculated counterstriker when his opponents also insist on pushing forward. Seventy-nine percent of his strikes are aimed at the head, with 15 percent going to the body and six percent to the legs. Expectedly, 84 percent of his strikes come from distance, with only three percent in the clinch and 13 percent to grounded opponents. Although his distance striking deservedly gets most of the acclaim, his ground-and-pound is lethal; when his opponents go down, he is decisive and precise in his follow-up strikes.

Diaz, too, is a pressure fighter who uses relentless volume to stifle opponents. He tends to use his reach advantage to keep himself at a comfortable distance and unload fast barrages, and he is at his best when he has his opponents against the fence. Of all his strikes, 86 percent are aimed at the head, with nine percent to the body and five percent to the legs. His preferred range is similar to McGregor’s, with one slight difference. At 82 percent, the lion’s share of his shots comes at distance. Another 12 percent are in the clinch and the remaining six percent are on the ground. The main difference is that Diaz is more willing to exchange in the clinch, whereas the ground is mostly reserved for working his submission game.

Here is what to look out for in their striking exchanges. First, McGregor is without question the more powerful puncher; he has knocked down and knocked out every fighter he has fought except Holloway, who he fought with a torn ACL. Diaz has logged half the amount of knockdowns and two-thirds the knockouts that McGregor has in over three times the amount of fights. On top of that, McGregor has yet to be knocked down in the UFC, whereas Diaz has been knocked down four times. McGregor has also never been knocked out in his career; Diaz suffered his first knockout loss to Josh Thomson in 2013. This is important, because both men are willing to trade punches to get their offense rolling. Neither is particularly defense-oriented, but McGregor does eat fewer punches and has an overall better striking differential than Diaz. This could very well be the deciding factor in the fight. The only monkey-wrench that could change this up is the fact that Diaz is the bigger fighter, and we have yet to see McGregor handle that kind of size disparity in his UFC career.

Should the fight go to the ground, here is what the numbers say: 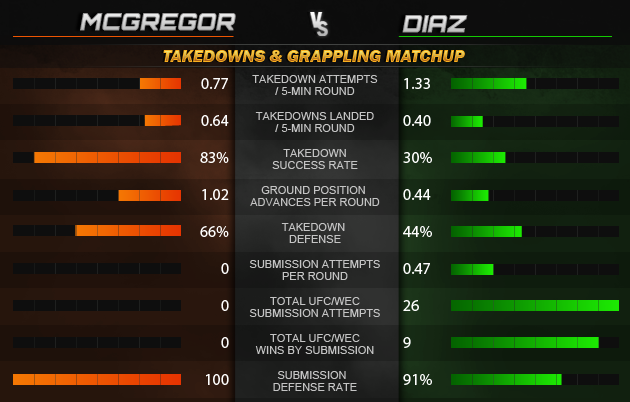 Clearly, this is Diaz’s world.

When it comes to grappling, Diaz is primarily a jiu-jitsu player, using his Cesar Gracie-certified submissions to attack opponents from all angles. Although he does look for takedowns regularly, he is not terribly successful in completing them. His submissions are deadly, though. Typically, when he attempts a submission in a fight, he eventually cinches one. He switches deftly from one submission to another and often uses them to reverse positions. He has favored guillotine chokes of late, but he also has a sneaky triangle from guard that has worked well for him in the past. His submission game makes it so that he does not look to advance position all that often, instead opting to create scrambles where he can snatch a limb. The last person who attempted to submit Diaz was Josh Neer back in 2008, and of the 11 submission attempts he has faced, only Hermes Franca was able to seal the deal with an armbar nearly a decade ago.

McGregor’s ground game is still very much unknown. He thwarted the stud wrestling of Chad Mendes -- on short notice -- but other than that, he has not had to face anyone who could test his grappling chops. While he has never fought a jiu-jitsu player of Diaz’s caliber, it is also true that very few fighters are capable of closing the distance and getting through McGregor’s vaunted striking arsenal to test his submission defense in the first place. Should he find himself on his back, the brown belt under John Kavanagh will have a lot of questions to answer regarding his submission defense and ability to scramble to safety. Word is that he is a quick learner and has solid technique, but as it stands, McGregor would be wise not to play with the slick submission savvy of his black belt opponent.


This is not the super fight we were promised, but it is a fantastic matchup nonetheless. The standup battle should provide fireworks, and if the fight goes to the ground in full consciousness, it gets even more interesting. McGregor is the prohibitive betting favorite in the -390 to -450 range. Diaz finds himself the underdog, anywhere between +280 and +375. Diaz has little to lose, however. His best work is at lightweight, and a short-notice loss at welterweight to a rising pound-for-pound mainstay will do little to slow down his career. McGregor, however, has a lot riding on a win. He still has his sights set on that lightweight belt, and a loss here could derail those hopes. A win, however, gives the Irishman the keys to both the lightweight and welterweight division’s elite, and so far, he has thrived under the spotlight. For a late-replacement fight, this is as good as it gets.

Data for the analysis was provided by FightMetric. Eric Stinton performed all analysis. Stinton and Sherdog.com assume no responsibility for bets placed on fights, financial or otherwise.