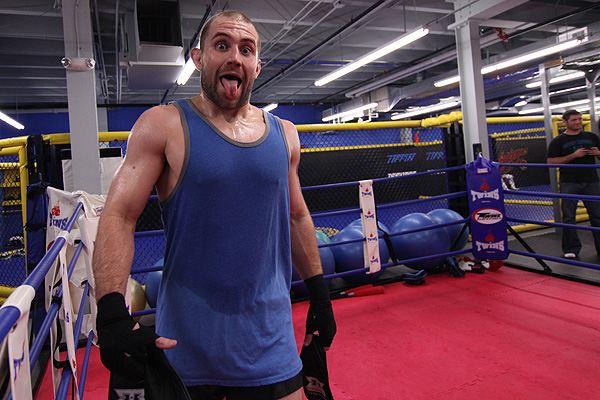 
Alan Belcher knows a golden opportunity when he sees one.

“The Talent” will confront “The Ultimate Fighter” Season 3 winner Michael Bisping in the UFC 159 “Jones vs. Sonnen” co-main event on Saturday at the Prudential Center in Newark, N.J. Flirting with a top-10 ranking despite a number of serious injuries and competitive hiccups, the 28-year-old stubbed his figurative toe in his last appearance, as he wound up on the wrong side of a unanimous verdict to Japanese grinder Yushin Okami.

A victory over Bisping, one of the Ultimate Fighting Championship’s most visible and polarizing figures, would likely springboard Belcher back into contention at 185 pounds.

“It puts me back in the top of the division,” Belcher said during a pre-fight media call. “We’re both coming off losses. We both have losses in our career, wins in our career, and now we’re going to see who the best is out of these two. I’m not really thinking about what the fans think or how confident Michael is. I’m just thinking about beating him.”

Bisping wants to erase some bad recent memories of his own, chiefly the knockout he suffered against Vitor Belfort at UFC on Fox 7 in January. The 34-year-old was believed to be on the cusp of a crack at middleweight champion Anderson Silva before an encounter with a lightning-strike head kick from “The Phenom” ruined those plans. Having never suffered back-to-back defeats in his career, Bisping has injected his typical bravado into the showdown with Belcher, baiting him with public barbs.

Belcher welcomes the added dimension “The Count” brings to the cage.

Photo: D. Mandel/Sherdog.com
Miller is 11-3 since joining the UFC.
Jim Miller has issued a stern warning to Strikeforce import Pat Healy ahead of his return to the UFC’s Octagon: do not expect a warm welcome.

Revered for his resilience, tenacity and commitment, the 29-year-old Sparta, N.J., native has put in long hours at the AMA Fight Club, as he takes aim at a 10th win in 12 outings in his lightweight showcase with the rugged and resurgent Healy. Miller wants to use the Sports Lab representative as another stepping stone at 155 pounds.

“I don’t bust my ass in this room here to have guys compete with me and have it be a close fight,” Miller said in his pre-fight interview with UFC.com. “I want to dominate and put guys away.”

Healy will ride a six-fight winning streak into the cage. The 29-year-old owns a 2006 submission victory over former World Extreme Cagefighting welterweight champion Carlos Condit, along with wins against onetime lightweight King of Pancrase Maximo Blanco, AMC Pankration standout Caros Fodor and ex-Sengoku lightweight titleholder Mizuto Hirota. Miller expects to be pushed but also believes he has a distinct edge over Healy in one particular area.

“It’s a tough fight,” Miller said. “He’s a great wrestler and grappler. We have a lot of similarities. I think I hold an advantage on the feet. If I can exploit a weakness, I’m going to.”


Only one of Chael Sonnen’s 11 bouts in the UFC has been contested at 205 pounds: a submission loss to Renato Sobral at UFC 55 in October 2005 ... Kurt Holobaugh submitted six of his first seven professional opponents, four of them inside one round ... Phi Davis won 112 of his 129 wrestling matches at Harrisburg High School in Harrisburg, Pa., before enjoying a decorated collegiate career at Penn State University ... Born on Feb. 9, 1984, James Head shares a birthday with actor Joe Pesci, former Dallas Cowboys quarterback Danny White and William Henry Harrison, the ninth President of the United States ... Hawaiian Yancy Medeiros is one of two undefeated fighters on the 12-fight lineup at UFC 159; Sara McMann is the other ... Gian Villante and Ovince St. Preux both played football in college, Villante at Hofstra University and St. Preux at the University of Tennessee ... Cody McKenzie was born in Cordova, a small city in southern Alaska with a population of less than 2,500 ... Roy Nelson owns a 2-6 record in fights that reach the judges and has not been awarded a decision since he outpointed Shane Ott under the International Fight League banner in 2007 ... Eight of Johnny Bedford’s nine career defeats have come by submission ... German prospect Sheila Gaff has finished two of her last three foes in 10 seconds or less.