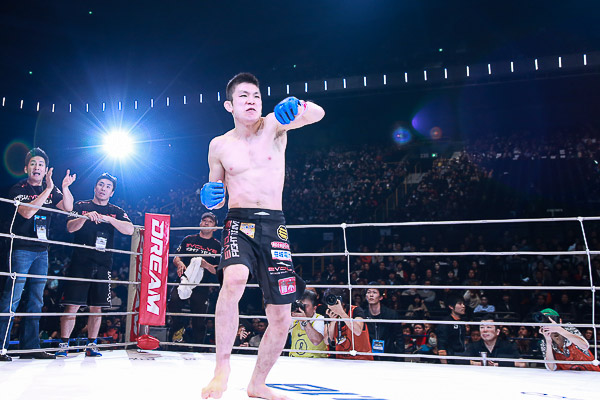 Shinya Aoki has finished 19 opponents in the first round. | Photo: Taro Irei/Sherdog.com


Mixed martial arts warriors will come out to play during the month of April.

The Ultimate Fighting Championship offers up two strong cards, spearheaded by Benson Henderson-Gilbert Melendez on April 20 and Jon Jones-Chael Sonnen on April 27. Promotions from around the globe will also play some of their aces: Tomasz Drwal in Poland, Shinya Aoki in Singapore and Richie Vaculik in Australia. Competitive bouts, intriguing style matchups and trendsetting scraps point the way for those jockeying for spots in the major leagues.

As always, this list does not focus on the well-promoted main event bouts from major organizations you already know to watch, but rather on fights from all over the planet that are worth seeing. UFC and Bellator MMA cards are excluded by design.

As two of Japan’s premier lightweights, Aoki and Boku have been on a collision course ever since they competed in the 2008 Dream lightweight grand prix. When the Krazy Bee representative knocked out Brazilian Jiu-Jitsu black belt Zorobabel Moreira to claim One Fighting Championship gold in October, Aoki took note and set his sights on the belt. A boxer and a wrestler like his famous stablemate, Norifumi “Kid” Yamamoto, Boku’s game plan is no secret. Will it be enough to fend off the seemingly infinite submission arsenal of Aoki? One FC’s April 5 undercard will stream live and free on Sherdog.com.

Although they may not be the clear-cut No. 1- and No. 2-ranked fighters in their weight class, the general consensus is that Waterson is the best current challenger to Penne’s title. With two impressive performances over longtime veteran Lisa Ellis and Jewels featherweight champion Naho Sugiyama, the 30-year-old Penne has separated herself from the pack and deservedly inhabits the top of the Invicta Fighting Championships mountain. Waterson will bank on youth, speed and the expertise of her revered training camp to dethrone the champion.

Many fighters are so desperate to reach the UFC’s famed Octagon that they are willing to fight not one but two weight classes about their preferred division. That was the case with “The Ultimate Fighter: Brazil” Season 1 alumni Lopes and “Soldado,” as they competed for spots in the house as featherweights, only to be stopped at the gates by Rony Mariano Bezerra and John Teixeira da Conceicao, respectively. Now these two flyweight studs collide in the Coliseu Extreme Fight 6 main event to decide the identity of the top unsigned Brazilian at 125 pounds.

Despite the fact that he can only boast seven professional fights and was a short-notice replacement for Rodrigo Luiz Baido, many see Frenchman Ka as the dark horse in this M-1 Global heavyweight tournament. In the quarterfinals, the Brazilian jiu-jitsu brown belt will take on Bellator veteran and muay Thai world champion Kudin in a classic striker-versus-grappler confrontation. Kudin was a disappointment in his lone appearance stateside and will need to perform better if he wants to be considered a top heavyweight in MMA.

Still the most internationally successful Polish fighter of all-time, Krakow’s Drwal returns from an 18-month hiatus that saw him nurse some minor injuries, expand his own academy and film a season of “Fight School” -- a Polish “Ultimate Fighter” clone. Now the 31-year-old heavy hitter is back fighting just a stone’s throw away from his hometown. Across the cage from the six-time UFC veteran will be young American Swofford. The 26-year-old Team Quest representative leaped out of obscurity with a short and sweet 41-second knockout of UFC veteran Jay Silva in February.

To say Alers has been patiently waiting for a Cage Warriors Fighting Championship title shot would be an understatement. First, he was supposed to fight champion Conor McGregor in September. The Irishman went down with an injury, and Alers instead fought and submitted Brazilian jiu-jitsu black belt Marcio Gracinha. Alers and McGregor were again supposed to meet on New Year’s Eve, but a hand injury forced the former to exit. With McGregor moving on to the UFC, “The Beast” will now meet a top 10 European featherweight in Solovaara. The 27-year-old Finnish export has won 10 of his last 11 fights.

Battling for the Road Fighting Championship lightweight title are local hero Nam and powerful Japanese grappler Kume. “The Korean Bulldozer” had to dig deep in his tournament semifinal with South Africa’s Vuyisile Colossa, who stretched the 31-year-old Team Posse fighter to the limit. Kume, meanwhile, made short work of seasoned Korean veteran Chul Yoon with a dominant performance that ended with his eighth career rear-naked choke. The Japanese fighter is riding a nine-fight winning streak and is the odds-on favorite to win the tournament.

One of the Far East’s most underrated and battle-tested welterweights will face one of the West’s most underappreciated and well-rounded 170-pounders as part of Deep’s latest offering. Shirai has gone out of his way to compete internationally during his career, which is quite unusual for a Japanese fighter. Meanwhile, Hornbuckle’s star first rose in Japan in August 2009 with his incredible head kick knockout of beloved veteran Akihiro Gono. Now, he returns to the place of his biggest success.

Unfortunately for him, most stateside fans remember Cage Warriors champion Linderman for being spectacularly knocked out by Anthony Johnson in the World Series of Fighting and suffering a close decision loss to Richard Hale in Bellator. Yet, the 29-year-old Californian is a well-rounded and durable fighter who has been competitive in two weight classes. Drysdale needs no introduction. One of the top no-gi grapplers of his generation, he is running a race against time to reach the big leagues while still in his prime. “Da Protege” will serve as a significant step up in MMA competition for the omoplata and triangle expert when they lock horns under the Legacy Fighting Championship banner.

Australian Vas competed two classes above his natural weight on “The Ultimate Fighter: The Smashes” in 2012 and still turned in strong performances, giving finalist Colin Fletcher a difficult fight and taking eventual winner Norman Parke the distance. The 29-year-old submission specialist now gets to take on somebody his own size, as he squares off with undefeated Macaco Gold Team member de Almeida. The 21-year-old comes from the world of muay Thai, where he holds a 26-3 record. So far, his style has translated perfectly to MMA.