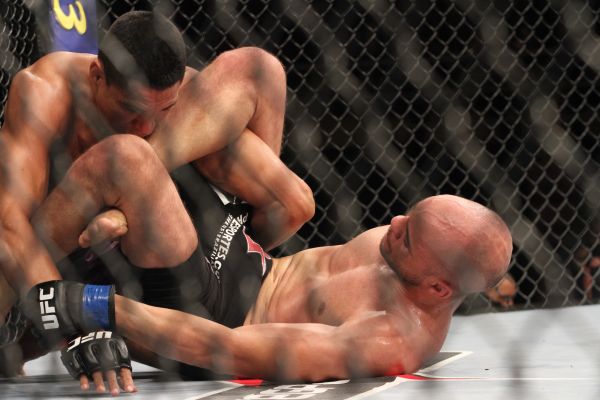 Though Araujo first found his takedown attempts to be futile, he eventually scored a reversal in round two that allowed him to deal out damage with elbows from Alcantara’s half-guard. Round three would bring more of the same, as Araujo planted his foe on the mat and retained top position to secure scores of 29-28 across the board from the cageside judges. 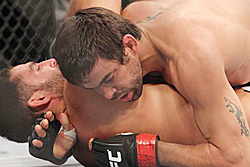 Now undefeated in 11 pro outings, the Brazilian dragged Mitchell to the mat just seconds into their bout and took the American’s back. Though “Daudi” put forth an excellent defensive effort and even attempted a last-gasp triangle choke in round three, the contest clearly belonged to Cabral, who continually passed to dominate positions and floored Mitchell with a straight right hand in round two en route to a unanimous decision victory. 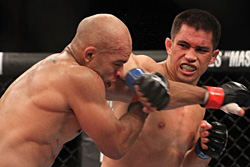 Photo: M. Alonso/Sherdog.com
Cariaso took it to Silva in round two.
Chris Cariaso scored an impressive stoppage victory over Iliarde Santos in their flyweight affair, weathering an early surge from the Brazilian in round one before stopping the crowd favorite with strikes in the second period.

Though Santos took control of the bout with his ground work in the opening stanza, Cariaso later found his range standing. Cariaso staggered the Jungle Fight veteran with a lead right hook before hurting him with a string of combinations, the last of which forced referee Keith Peterson to halt the contest to save Santos from excessive punishment. 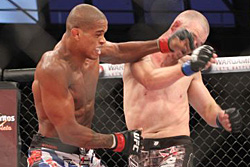 The Brazilian pressed for the takedown early but was met with considerable resistance, and “Nuguette” later shifted his focus to his wide, unorthodox standup attack. The method proved effective, as Alves caught the American with a straight left that put him on the canvas and left him prone for the finish. The 30-year-old brought that about at 3:54 of the first frame with a flurry of punches and hammer fists.