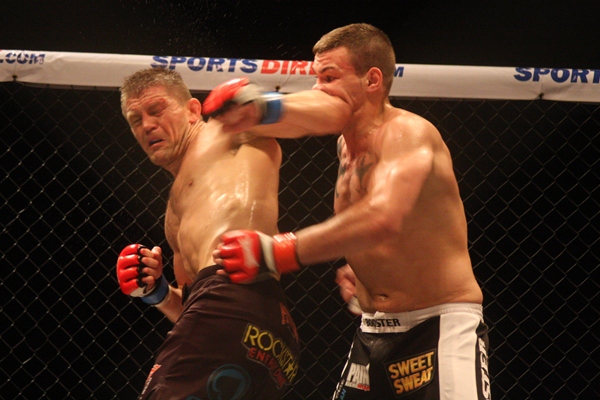 BIRMINGHAM, England -- Tom Watson scored a second-round TKO over Jack Marshman to retain his British Association of Mixed Martial Arts middleweight title in the main event of BAMMA 9 at the National Indoor Arena on Saturday.

The crowd was bolstered by a large contingent from serving paratrooper Marshman’s regiment, and the atmosphere was cranked high in anticipation of the fight. Both combatants set off at a furious pace, with Marshman trying to find his range, while the experienced Watson picked him off with punches and kicks. “Kong” had the better of some vicious exchanges, but also suffered a cut above his eye for his troubles.

The second stanza continued in the same fashion, with both men looking to land big shots. Marshman continued to push forward despite taking a number of tasty leg kicks, but Watson’s more varied arsenal brought the beginning of the end. 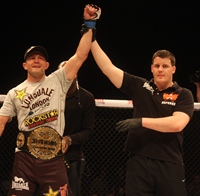 David Lethaby
Watson kept his gold.
As his Welsh opponent tried to close the distance, “Kong” landed a spinning-back elbow. Marshman was rocked and Watson kindly helped him on his way down. The years of training across the Atlantic began to pay dividends as Watson controlled his man on the deck while landing spiteful punches and elbows. Marshman offered nothing in return, prompting referee Marc Goddard to stop the contest at the 4:50 mark, making for an impressive comeback for Watson after a nearly year-long injury layoff.

In addition to his normal evil clown makeup, Colin Fletcher walked to the cage with two gimps on leashes for his co-main event bout with Jason Ball. The man they call “Freakshow” is best known as submission artist, whereas Ball is currently enjoying success as a pro boxer. Fletcher opted to keep the fight standing, however.

Showcasing his muay Thai skills, the 6-foot-2 lightweight from Sunderland kept out of Ball’s punching range as he found the target with his leg kicks. This pattern continued until the final round, when Ball pushed the pace and began to enjoy more success. The pair put on a grandstand finish, trading hellish punches for the closing 10 seconds before warmly embracing. All three judges saw it 30-27 in favor of Fletcher, a man who is creating a buzz inside and outside of the cage.

In earlier action, Golden Glory’s Jason Jones was declared the winner when a cut on Przemyslaw Mysiala’s head began discharging blood in the style of Lake Geneva, forcing an end to the light heavyweight scrap at 3:51 of the opening frame. 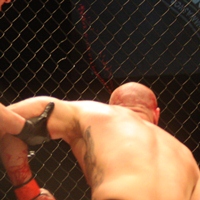 D. Lethaby
Mysiala gushed plasma.
The former M-1 Challenge regular wanted no part of Mysiala on the feet and was able to take the London-based Pole down at will. Mysiala had his face buried in the canvas during a prolonged rear-naked choke attempt by the Dutchman, and when Mysiala came up for air, there were gasps and shouts of “there she blows” as the red geyser erupted. The doctor came in to inspect the wound, but it was a mere formality as the contest was halted.

Jake Murphy gave David Round a wrestling lesson before signing off with a rear-naked choke in the second frame of their lightweight bout. From the moment Round threw a kick early on and was taken to the canvas by the American, the writing was on the wall. The bloody mess on Round’s face was testament to the efficiency of Murphy’s earlier elbow attacks.

Late replacement Patrick Vallee defied the odds to upset the highly-touted Andrew Punshon at middleweight. Both men played their part in a hugely entertaining grappling contest, but it was the man from Paris who made the most convincing submission attempts. The end came in the second round when Vallee applied an armbar. After a spirited escape attempt, Punshon accepted the inevitable and tapped at the 2:16 mark.

Hometown boy Tom Breese towered over Cornishman Mark Tucker and bossed their welterweight fight from the start. Tucker took a lot of punishment, but hung in there until a brutal knee to the body folded him in half at 1:40 of the second round.

After a couple of close rounds, Antanas Jazbutis came out firing like a small, Lithuanian Cung Le in his lightweight fight with Dale Hardiman. Despite dominating the final frame and throwing a selection of outrageous kicks, Jazbutis was a loser on the scorecards [29-28, 29-28, 29-28] -- a decision that was roundly booed by the crowd.

For long periods, 35-fight veteran Matt Ewin forced Lee Barnes to fight at his pace and looked to be grinding his way to a decision until Barnes caught him in a guillotine in their welterweight tussle. With only three seconds left on the clock in round two, Ewin was forced to tap, and internet forum legend “Leeroy” celebrated with a series of strongman poses.

After being under the cosh early on, Scotsman Rab Truesdale turned the tables, unleashing a spectacular series of elbows from the guard of Sam Mensah to force a TKO stoppage at 4:32 of round one in a light heavyweight clash.

Heavyweight Catalin Zmarandescu was unable to answer the bell for the second round after being left in a heap on the canvas courtesy of a knee to the ribs from the undefeated Mark Godbeer.

In the first fight of the evening, Luke "The Bigslow" Barnatt defeated Lee Johnson by way of rear-naked choke in a middleweight affair.