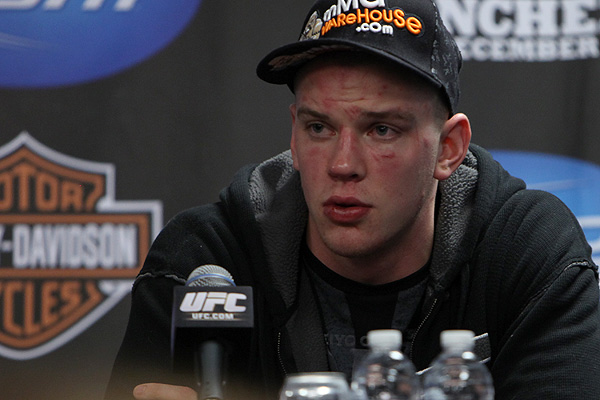 Stefan Struve may have picked up a win on Saturday night in the UFC on Fuel TV 5 headliner, but the “Skyscraper” currently has something far more serious on his mind.

“My dad has been dying of cancer for about two months,” Struve told Fox Sports following his victory over Stipe Miocic at the Capital FM Arena in Nottingham, England. “He’s been in therapy for about four weeks, now. He’s doing well, but still, it was really tough. Happily, [I will get to go see him now]. I’ve been wanting to [see him] all week. I just feel great to get this win. It will be good to go home and just focus on that now.”

Struve (Pictured, file photo) managed to control his emotions during his first round with the hard-punching Ohioan, delivering one of his trademark slow starts. Miocic took advantage of Struve’s lack of urgency in keeping him at range by quickly closing the distance and continually ripping hooks to the head and body.

According to Struve, however, his conservative beginning to the fight fell in line with his game plan. In round two, the Dutchman looked like a completely different fighter, riffling off a steady stream of solid jabs before buckling the American with a sharp uppercut that put him on his bicycle midway through the frame.

Struve pursued his wounded prey, eager to finish the fight. However, despite landed cleanly several more times, the Bob Schrijber pupil was unable to locate Miocic’s chin. Abandoning his attack from range, Struve began to stand in front of his hurt opponent, a decision that allowed Miocic to fire back with heavy hooks over the top, one of which appeared to stagger the Dutchman momentarily. Despite this, Struve says that he was able to maintain his composure to weather Miocic’s retaliatory efforts.

“No, [he didn’t hurt me]. I’ve just got a couple of bruises, but I’m good. I think that people won’t discuss my jaw that much anymore,” said Struve. “I felt his right hand wasn’t hard enough to take me out if I just paid attention and [clenched] my jaw when he hit me.”

Struve fought through Miocic’s offense and quickly went back to work, blasting the former NCAA Division I wrestler with a combo ending with another hard right uppercut. Smelling blood, Struve advanced rapidly on his retreating foe, connecting with several more clubbing uppercuts that forced referee Herb Dean to save Miocic from further punishment.

“I saw he really slowed down in the second round, and I decided to chase him and really start pressuring him. I rocked him a couple of times and finished him with a good series of uppercuts,” said Miocic. “I’m still getting better and stronger with every single fight. There is a lot of power in my punches. Every single shot I hit him with, I just backed him down. I felt really good. I just need to use my reach more, but we’re working really hard on that.”

With four straight wins under his belt, Struve is eying a bump up in competition. Though the 24-year-old is ever-mindful that he still has plenty of time to fulfill his potential as a mixed martial artist, he did not mince words when asked whom he would like to face next.

“I think I’m one or two wins away [from a title shot],” Struve said. “I think [Fabricio] Werdum would be a great fight for me. He’s definitely one of the best guys in the world. His Brazilian jiu-jitsu is awesome, but I think I can compete with him on the ground, and I think I can definitely rough him up on the feet.”