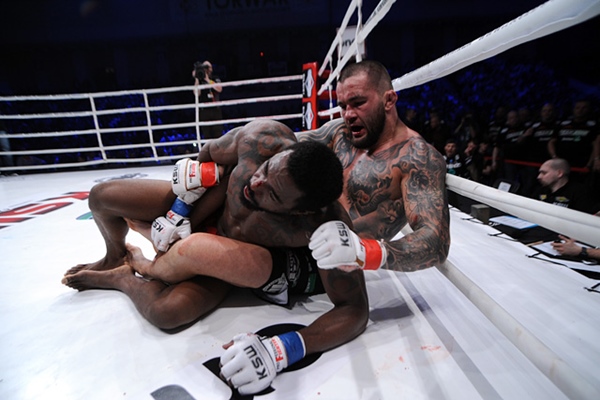 
They say familiarity breeds contempt, but when it comes to MMA trilogies, it can also make for compelling theater.

The third meeting between Michal Materla and Jay Silva in the main event of KSW 26 featured its share of drama, momentum swings and near-finishes. When the dust settled, Materla retained his middleweight crown with a hard-fought, three-round verdict over Silva at Torwar Hall in Warsaw Poland on Saturday. Judges’ scorecards were not revealed for any of the event’s bouts that went the distance.

Silva had won the previous matchup via second-round knockout last September, while Materla was victorious in their initial clash at KSW 19 in May 2012.

The American was on the verge of another knockout triumph when he floored Materla with a pair of uppercuts early in the first round. “Da Spyda Killer” would again have the champion reeling with a series of big right hands later in the frame before Materla turned the tables with a late takedown. Materla then attempted to secure an arm-triangle choke but was unable to pass to side control before the round ended.

Materla was able to swing the fight in his favor by mostly avoiding the dangerous standup exchanges over the final 10 minutes. He mounted Silva repeatedly, hunted for submissions and stayed active with strikes on the ground. After nearly finishing the fight with a tight triangle choke in round two, the man known as “Magic” overwhelmed his opponent in the final frame, mounting Silva near the ropes and maintaining a dominant position for the duration of the round. 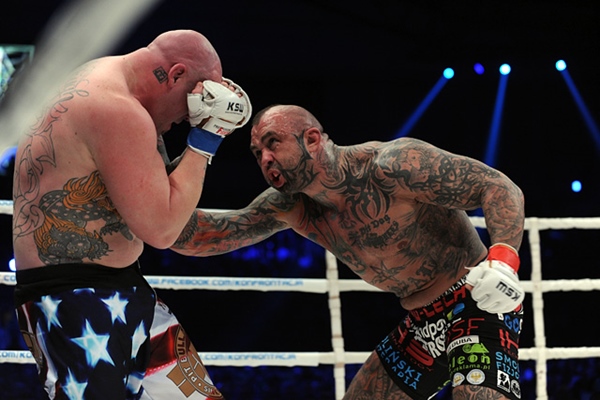 Photo: P. Pedziszewski/Sherdog.com
Rozalski (right) staged a second-round comeback.
Resilience was the order of the day for Marcin Rozalski in the heavyweight co-headliner. Dropped by a left hook and battered from ground-and-pound in the opening period by Nick Rossborough, the kickboxing specialist weathered the storm and rallied to earn a technical knockout triumph over the former King of the Cage champ in the second frame.

Things changed drastically for Rozalski following the harrowing initial stanza. “Rozal” attacked his man in the clinch before fending off a standing arm-triangle attempt. After escaping the submission attempt, Rozalski continued to tee off with flurries of punches to the head and body before moving into tie-up range once again. From there, the 35-year-old Pole floored his foe with a short punch and turned away to celebrate what he believed to be a knockout victory. The referee let the bout continue, however, so Rozalski pounced on the prone Rossborough, trapping his foe’s head with his leg and ending the clash with a series of unanswered punches to the body. 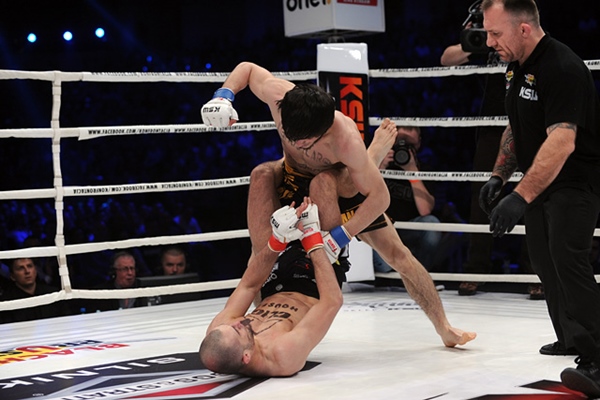 Photo: P. Pedziszewski/Sherdog.com
Azhiev (blue tape) dropped an illegal
knee on Sowinski.
Earlier, the rematch between featherweights Anzor Azhiev and Artur Sowinski offered little in the way of resolution, as Azhiev was disqualified for landing an illegal knee in the opening frame. The action was frantic while it lasted. Both fighters exchanged recklessly, but it was Azhiev who gained the upper hand by flooring his adversary with a counter right hand.

The Poland-based Chechen then swarmed for the finish and in his haste, landed a knee to Sowinski’s chin before the Polish fighter was able to return to his feet. Sowinski immediately collapsed from the blow and was deemed unable to continue after a brief delay. Azhiev and Sowinski previously squared off at KSW 24 last September, with an accidental clash of heads resulting in a no contest.

Four-time UFC veteran Goran Reljic captured a questionable unanimous decision over Karol Celinski in a light heavyweight scrap. Celinski was the superior boxer in a bout that was contested primarily on the feet, but while the Pole’s takedown defense was solid, late takedowns by Reljic in rounds one and three could have made the difference in a fight that lacked a signature moment. 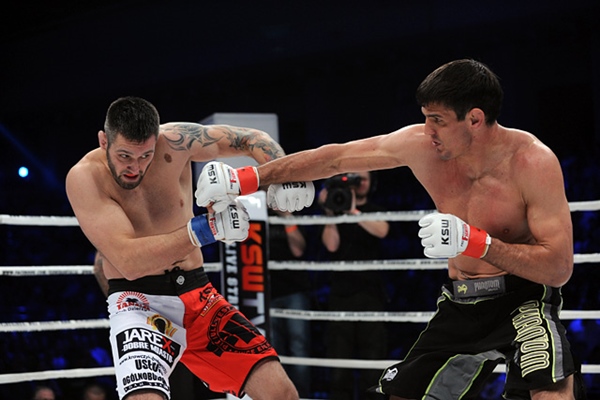 Photo: P. Pedziszewski/Sherdog.com
Reljic (right) edged Celinski on the scorecards.
For the most part, Reljic’s attempts to grind down his foe failed, as Celinski was able to land a decent amount of offense in clinches and from his back. It wasn’t enough to sway the judges, however, as Reljic won for the fifth time in his last six outings.

Fitness model Kamila Porczyk cruised to a unanimous verdict over 18-year-old Iryna Shaparenko in a sloppy women’s flyweight clash. Very little striking technique was on display as the two women alternated wild, brawling sequences with patches of passivity, twice drawing warnings from the referee for reluctance to engage. Through it all, Porczyk was able to batter her opponent in numerous close quarters exchanges.

The 36-year-old Pole had an opportunity to finish in round two, as she mounted Shaparenko and spent the frame unloading spurts of ground-and-pound and hunting for rear-naked chokes. Somehow, Shaparenko was able to make it to the final bell.

Michal Andryszak needed to knock out Paul Slowinski twice to achieve victory in a bizarre heavyweight clash. Andryszak dropped Slowinski with a right hand inside of the bout’s first minute, which appeared to be enough for the win as the referee quickly intervened to halt the bout. Slowinski vehemently protested the stoppage, and after a brief delay, the action was restarted in the ring. Andryszak wasted little time in putting his foe down with yet another right hand -- this time ending the contest for good.

Sergej Grecicho entered his bout against Jakub Kowalewicz with 15 submissions among his 19 career victories, but it was his hands that would carry him past his Polish opponent. Unable to get the larger Kowalewicz to the canvas consistently, Grecicho outpaced his foe on the feet down the stretch en route to winning a three-round verdict at lightweight.

In the evening’s opening bout Arbi Shamaev relied on takedowns, top control and superior grappling to capture a unanimous decision over Helson Henriques at featherweight.