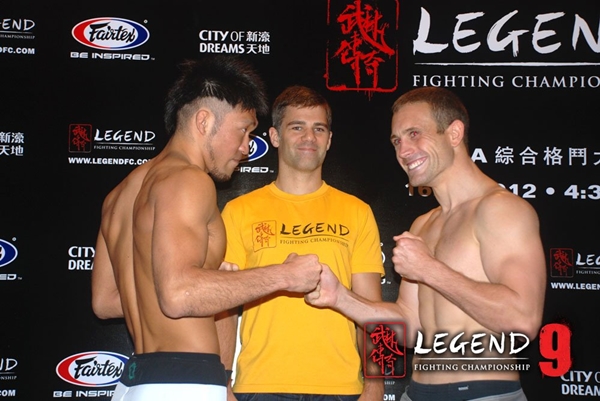 Tokyo’s Ando tipped the scales at 155.2 pounds while Sydney-based Hill came in at 155.1, both with eyes on a shot at reigning Legend FC lightweight titleholder Jadamba Narantungalag of Mongolia.

Ando, 27, comes off an impressive reverse-triangle-choke victory over Hill’s countryman, Damien Brown, at Legend 7 in February. The Wajutsu Keishukai representative is 4-1 in his last five starts, with the only loss coming in a contestable split decision against Guan Wang at Legend 6. Also 27, Hill has rebounded from back-to-back losses in the Legend ring to post consecutive first-round finishes of Un Sik Song and Yusuke Kasuya.

Co-main event welterweights Dan Pauling and Jingliang Li didn’t have it quite so easy on the scale. Pauling initially checked in at 171.6 pounds, but the 19-year-old from Queensland, Australia, made it down to 170.8 on his second try. Li was unable to cut any further weight after coming in at 172.4, but Pauling agreed to go forward with the bout and will receive 20 percent of Li’s purse.

Weight was only an issue for one of Legend’s four bantamweight tournament hopefuls. Having weighed in a fraction over the 61.5-kilogram (135.6-pound) limit, former titleholder Honggang Yao was the first fighter to return to the scale and make weight. His opponent, Agustin Delarmino of the Philippines, came in well under at 132.5 pounds. On the other side of the bracket, Taiyo Nakahara (135.5) of Japan and Nam Jin Jo (135.4) of South Korea both checked in without incident. The winners of the two matchups will clash later this year for the Legend bantamweight title recently vacated by Tuerxun Jumabieke.

All told, eight of the event’s 20 competitors missed weight on their first attempt, a fact which Legend co-founder Michael Haskamp attributed mainly to the region’s unfamiliarity with the process.

“Obviously, weight-cutting is not the same science here in Asia as it is in the U.S., and a lot of guys are still figuring it out,” Haskamp told Sherdog.com. “This is actually the largest number of people that we’ve ever had miss weight, and seven out of eight made weight on the second attempt. On one hand, ultimately, almost everybody was fine. On the other hand, it is pretty disappointing that they’re not being as professional as we’d like them to be, which is making weight on the very first attempt.”

* Li missed weight and will forfeit 20 percent of his purse to Pauling.