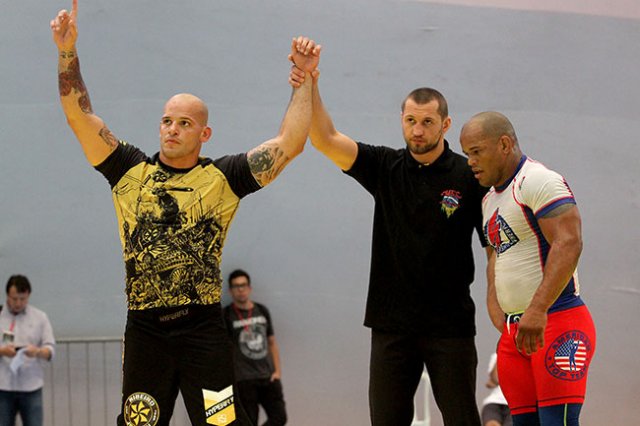 
SAO PAULO -- Multiple-time jiu-jitsu world champions Xande Ribeiro and Rodolfo Vieira will meet Sunday in the 218-pound semifinals of ADCC 2015. It comes as a pleasant surprise to Vieira, who told Sherdog.com that he has been struggling with injuries for several months.

“The tournament has been perfect for me so far,” said Vieira. “My year has been awful. I haven’t been able to compete at all, but thankfully I’m totally recovered from my injuries and I’m in my best shape now. It’s been great to fight well in a competition I’ve never won. I hope I can keep that pace tomorrow.”

After submitting Adam Sachnoff and Cassio da Silva, Vieira now waits to get back on the mat against two-time ADCC champion Ribeiro, who on Saturday finished Yukiyasu Ozawa and outpointed UFC fighter Hector Lombard.

“Xande is a very difficult opponent,” said Vieira. “He’s very experienced and well-rounded. I will try to push the rhythm. If I feel that I can’t take him down, I may pull the guard and try to sweep, and if it doesn’t work, I can try to stand again and start all over. I’ll go for the finish and, if God allows, I will get it.”

When asked if the winner of the matchup will go on to win the tournament, Ribeiro praised his opponent but would not rule out Felipe “Preguica” Pena or Joao Assis, the other two semifinalists.

“I know it will be tough. He had a great camp, surrounded by great partners,” said Ribeiro. “This division is going to have three finals, actually, because Felipe, Joao, Rodolfo and me have the same chances. Here in ADCC, every fight is a final.”