The interim Ultimate Fighting Championship featherweight title will be up for grabs in the UFC 206 headliner on Saturday at the Air Canada Centre in Toronto. Though it took an injury to the original main event and the invention of an unnecessary interim belt, the fight between Max Holloway and Anthony Pettis, two of the UFC’s most exciting fighters, is deserving of the spotlight.

Holloway, who turned 25 six days before the fight, is riding a division-record nine-fight winning streak. His last loss was against former featherweight king Conor McGregor in 2013. Since then, six of his nine wins have not needed the judges’ stamp, even as he has faced increasingly higher-ranked competition. He was last in action in June, when he took a unanimous decision from onetime title challenger Ricardo Lamas. This will be Holloway’s second fight of 2016, making it only the second time in his UFC career that he fought less than four times in a calendar year.

On the other side of the cage will be Pettis, the former UFC and World Extreme Cagefighting lightweight champion. By the end of 2014, Pettis was arguably one of the best lightweights ever, boasting a 10-2 combined WEC and UFC record, with eight finishes and a flawless 3-0 mark in title fights. Hard times have followed for the offensive dynamo, as he lost three straight fights at lightweight before dropping to 145 pounds to reverse the losing streak. He was last in action in August, when he submitted Charles Oliveira in his featherweight debut on the opposite end of Canada. This will be his fourth fight of 2016 -- the most he has ever fought in the UFC in a calendar year.

There are a lot of angles from which to look at this fight. Let us start with the Tale of the Tape (current odds): 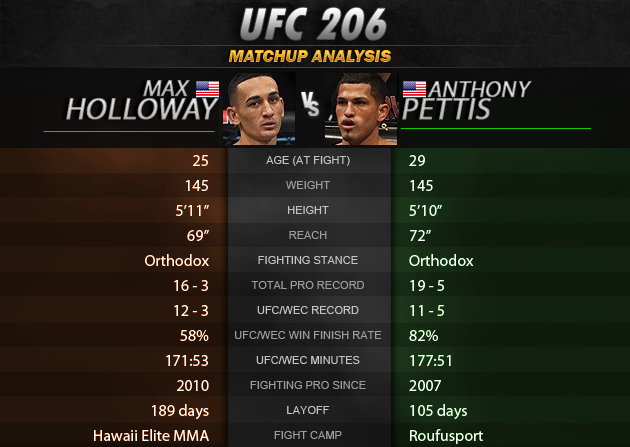 As far as the anthropometrics are concerned, there is not much separation between the two. Pettis’ three-inch reach advantage is the most prominent difference -- a non-negligible edge coming into a fight that will likely be a kickboxing match that takes place in an MMA setting.

The experience factor is also tough to call. On one hand, by the time Holloway made his UFC debut, Pettis was already a highly ranked lightweight and WEC champion. On the other hand, in the three additional years of professional fighting, Pettis has only fought once more than Holloway. The real difference is this: Pettis has fought in the championship rounds twice, whereas Holloway has never been past the third round. How their conditioning will hold up in the latter rounds could prove to be significant, since there is a good chance this fight will go to the judges; Pettis has never been finished, and Holloway has only been finished once, when he was submitted in his UFC debut.

Holloway and Pettis share two common opponents in Oliveira and Jeremy Stephens. Holloway and Pettis beat both of them. The Oliveira fights do not tell; the Brazilian was injured early against Holloway and it was Pettis’ first time cutting down to featherweight. Stephens provides an interesting parallel, though. Holloway helped Stephens prepare for Pettis, and Pettis ended up taking a hard-fought split decision win. Holloway, on the other hand, took a clear-cut unanimous decision over Stephens. That may or may not provide much insight into the actual matchup, but it is worth mentioning.

The final aspect to take note of is their stances. Holloway effectively switches his stance back and forth throughout his fights to find new angles and string together fluid punch-kick combinations, whereas Pettis is known for taking the opposite stance of his opponent to free up a vaunted kick repertoire. Both men are flexible and adaptive strikers, making the technical chess match of their footwork something to keep an eye on.

This will primarily be a striking match, so let us take a look at the striking numbers: 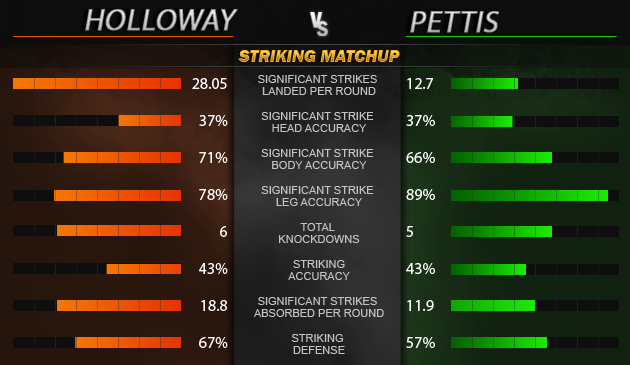 The striking matchup should be fun. Both Pettis and Holloway are diverse, dynamic strikers. There are some similarities to their games, but there are also some distinct differences.

The Hawaiian targets his opponents’ heads for 82 percent of his total strikes, while body shots and leg strikes take up the remaining 14 percent and four percent, respectively. His preferred range breaks down accordingly: 87 percent of his strikes come at distance, with eight percent in the clinch and the remaining five percent to opponents on the ground.

Pettis’ averages are nearly identical. Head strikes account for 82 percent of his output, body strikes 11 percent and leg kicks the remaining seven percent. He is most comfortable when striking from distance, which makes up 88 percent of his offense, whereas the clinch (five percent) and ground (seven percent) make up the remainder.

Both use creative kick-punch combos that are hard to predict, and they have a similar knockdown ratio; Holloway has one more knockdown with one less fight under his belt, but it is worth pointing out that Pettis has been fighting bigger, more durable opponents at lightweight for most of his career.

Moreover, Pettis and Holloway are both at their best when dictating the pace and range of the fight, which leads to the glaring difference between them: volume. Holloway is a much busier striker, landing more than twice as many strikes per round than Pettis. He does this while matching Pettis’ accuracy and being harder to hit. Do not be fooled by the strikes absorbed per round: Holloway does get hit more, but that is a function of his pace, not an indictment on his defense. He still evades more strikes than Pettis does, given the amount of exchanges in which they are involved. In this way, Holloway is a more straightforward pressure fighter. Pettis, meanwhile, is more than capable as a counterstriker, even if he prefers to stalk his opponents and pick his openings moving forward. Whether or not Holloway is able to push Pettis into reverse and whether or not Pettis will be able to string together meaningful counters will be the dynamic to watch.

It will likely be a kickboxing duel, but the grappling matchup could prove to be a game-changer, as well. Here is how the wrestling and submission numbers look: 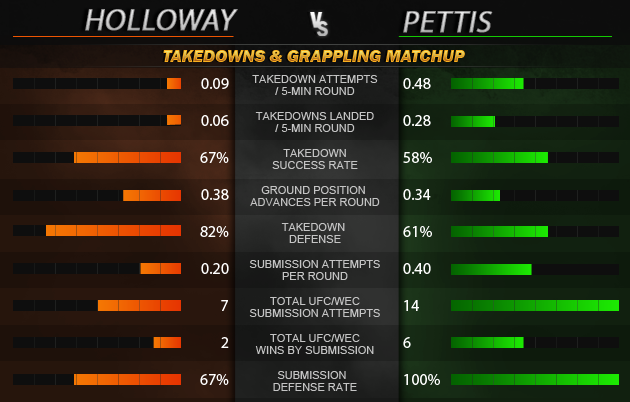 While both “Showtime” and “Blessed” possess fight-ending submission skills, the ground is a more favorable arena for the former lightweight champion. Neither of them poses much of a takedown threat, but Pettis at least attempts one per fight, whereas Holloway has only attempted three in his entire UFC run. Pettis’ biggest career struggles have come against superior grapplers, but it is unlikely that he will struggle similarly against Holloway since “Showtime” is not giving up much in the way of physicality or technique here.

If the fight goes to the ground, the edge must again go to Pettis. He has a dangerous submission game from all angles that has earned a reputation for submitting people who are notoriously hard to tap. Holloway is no amateur on the mat, but the numbers show that Pettis is far more willing to engage in grappling exchanges and much more effective, as well. It is also worth noting that Holloway has been submitted before. Granted, it was in his UFC debut and he has improved tremendously since then -- no one since has attempted a submission against him -- but it is noteworthy nonetheless.

All things considered, it is not likely that they will be able to take each other down with wrestling alone. Both have average-at-best takedowns and above-average takedown defense. However, if they mix takedown attempts with combinations on the feet, it will not only increase the probability of a completed takedown but also make the striking more effective. Given Pettis’ rate of takedown attempts and superior submission game, there is a good chance this will play a role in his overall strategy for the fight. If he can get it to the ground for a prolonged period of time, “Blessed” will be in trouble.


The original headliner fell through and the featherweight title picture is a mess. Are there things to complain about? Sure, but this matchup is not one of them. Pettis and Holloway are among the most exciting strikers in all of MMA, and for the most part, they are evenly matched. The betting lines show as much: Holloway is a slight favorite anywhere between -161 and -185, while Pettis is an underdog in the range of +130 to +164. Both of them have several ways to win, and no matter who winds up with his hand raised, it sets up even more exciting fights with current champion Jose Aldo or estranged former champion McGregor.

Data for the analysis was provided by FightMetric. Eric Stinton performed all analysis. Stinton and Sherdog.com assume no responsibility for bets placed on fights, financial or otherwise.