LEMOORE, Calif. -- It was a night of short mismatches during the MMA portion of “Best of Both Worlds,” a mixed boxing and MMA event held in conjunction with the Palace Fighting Championships at the Tachi Palace Hotel and Casino. In the main event, featherweight prospect Alexis Vila dominated Ben Nguyen, earning the TKO stoppage from a vicious right hook just 34 seconds into the second round.

Vila, an Olympic wrestling bronze medalist by way of Cuba, showcased his superior wrestling skills throughout, and Nguyen had nothing for his aggressor.

The night’s co-main event was one of the more exciting bouts of the night. Ulysses Gomez overwhelmed David Suarez, submitting him via rear-naked choke at 1:45 in the first round.

Erin Toughill, also known as "Steele" on NBC’s second season of “American Gladiators,” had little trouble finishing off Karen Williams. Toughill was much bigger and it worked to her advantage. Toughill simply overpowered and battered her outmatched opponent with swing after swing until referee Jason McCoy stepped in to save Williams on her feet at 2:06 of the first round. 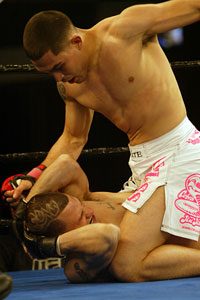 Jeff Sherwood/Sherdog.com
Ulysses Gomez (top)
vs. David Suarez
Heavyweight prospect Brandon Cash entered his fight against Steve Gavin with a perfect record, and kept it intact with a 26-second bashing.

The Fresno native stormed across the ring and dropped Gavin with a left uppercut, then followed him to the ground and coaxed out the tapout. Cash improves to 5-0 with the impressive win.

In other heavyweight action, Mike Hayes forced a verbal submission from Rick Cheek at 1:01 into the second round.

Cheek looked solid at the start, controlling the first round with wrestling and good top control. But Hayes turned the tables early in the second and took Cheek to the canvas, where he finished the proceedings with his fists.

In one of the most anticipated fights of the night, wrestler Chad Mendes steamrolled Lion's Den fighter Leland Gridley, stopping him with strikes at 1:58 of the second round. Mendes (2-0) remains undefeated, and cements himself as a real prospect to keep an eye on in the future.

The night’s action kicked off with a battle of local undefeated fighters, as Joe Morales outwrestled Joey Cabezas to a split decision victory.