STOCKTON, Calif. -- Designed to showcase up-and-coming talents, the Strikeforce Challengers series puts on display several fighters that will appear on bigger stages in the months and years to come.

Strikeforce Challengers 15, held at the Stockton Arena, also served some object lessons on the state of MMA as we know it. Here are four storylines from Friday’s event.

‘The Silverback’ a Legit Title Contender

Justin Wilcox’s one-round blitz of Rodrigo Damm was a savage tableau with a recurring theme. Wilcox swung, Damm got hit and the Brazilian was bounced around the cage like a pinball. Yet Damm, to his credit, survived the five-minute assault despite several moments where a stoppage would not have brooked too much disapproval from the crowd or viewers. It was that brutal.

Wilcox’s wrestling and heavy hands will make him a handful for whoever emerges with the Strikeforce lightweight belt on Saturday in San Diego. With Gilbert Melendez taking on Tatsuya Kawajiri, the promotion definitely will be in need of a high-octane follow-up act, especially as its championship bouts in the days to come will invariably be compared to the UFCs top-caliber equivalents.

Wilcox is ready, and while he is likely a fight or two away from a title shot against the champion, that is probably better for him, as he will just have more time to tighten his game. Wrestlers get a bad rap in MMA, but wrestlers who come to bang straddle the fine line between being fan friendly and technically sound. “The Silverback” was both of those against Damm.

Desired skill sets in MMA are in vogue and then fade away, as the sport’s dominant athletes showcase their effectiveness. However, with the emergence of the high-level wrestler/athlete in the game, one has to wonder if jiu-jitsu will ever see anything resembling the heyday it enjoyed in MMA’s early days, roughly defined as 1993-2000.

Each fight is only one mere slice of the data pie, so to speak, but Wilcox’s blitz of Damm was another reminder of the mountain a jiu-jitsu-based fighter has to climb when facing a talented wrestler with better standup.

I would be willing to venture that fewer fights in the last two to three years were won via submissions than any similar time frame in the history of MMA. In fact, if one discounts rear-naked chokes, which are often as much a product of punishment and exhaustion, it is getting to the point where an armbar or triangle win is a rarity on many cards.

The highly technical submission, such as the inverted triangle or twister -- both recently hit at Bellator Fighting Championships and UFC events, respectively -- is successful because of the surprise factor in defending them. It will be interesting to see how counters develop to those, as fighters start trying them. My guess is you will see a few fighters attempt them in upcoming cards, with defenses for them evolving nearly as quickly.

Still, the days of going into someone’s guard and getting armbarred seem long gone. Guys like Wilcox have rendered that a dangerous strategy at best. Even worse, they beat the snot out of their opponents before it ever gets there.

Fighters are simply not incentivized to use the guard to score points. It remains murky as to what judges award for a threatening submission attempt. I would not mind seeing some scoring criterion for that; but until then, the guard seems more and more a place to shy away from, unless you are pretty sure you can hit a fight-ending submission. 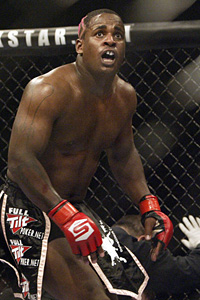 As Sherdog’s resident fight previewer, I would estimate the injury/dropout rate at events to be 15 percent, something that always gnaws at me whenever I turn in a preview piece a couple weeks early. Invariably, someone will be scratched from the card, necessitating a re-write of that particular fight. It is inevitable, what with the high level of physical exertion and hazards of preparing for a fight -- and the athletes have to constantly adjust.

It is also a juicy rationalization to delay filing my previews, because every time I get one in early, a couple guys get hurt, and I have to go through the revision process again. But I digress.

Whether you are a late substitute, as Lorenz Larkin was on Friday filling in for Satoshi Ishii, or the guy fighting the sub, as Scott Lighty was in taking on Larkin, there is a lot of guesswork and mental adjustments required. It is not easy for anybody involved.

Larkin’s upset knockout of Lighty was a stark reminder of how dangerous these kinds of bouts can be. For the most part, the spot is taken by a guy like DaMarques Johnson, who was stopped against Amir Sadollah after Johnson filled in for an injured Duane Ludwig at UFC Fight Night 24. The late substitute is often a guy with everything to gain and little to lose, facing a guy in the exact opposite situation. His conditioning is often a wild card. Though he will state he has been training -- and most have to some extent -- he still takes a fight where he has not had the proper camp to prepare and peak at the right time.

The A-side fighter, meanwhile, has some wild cards of his own with which to deal. Lighty’s situation was a perfect example. Slated to face Ishii, an Olympic gold medalist in judo, he instead got Larkin, an unbeaten former heavyweight who had fought on smaller shows and earned a reputation as an aggressive banger. To his credit, Lighty took a ton of punishment before finally succumbing. It was a breakout performance for Larkin.

One man’s loss is another man’s gain, but the bout really did remind one of how quickly fates can change when last-minute card alterations must be made. Props go out to all those involved -- both the late subs that step up when called upon and the fighters that put themselves on the line with little to gain and so much to lose.

Fodor a Live One

You have to love the fighter that takes everything available to him and smashes it repeatedly. Caros Fodor is exactly that guy. His performance against David Douglas was the hit-’em-with-the-kitchen-sink approach, with masterful clinch work and down-and-dirty striking. The guy simply punishes you wherever he can connect.

This is especially effective in spots like guard or half-guard, where body punching remains a woefully overlooked art. Whacking an opponent in the ribs may not get the crowd riled up, but it goes a long way toward wearing him down and, often, improving position. I love the fighter that plants a half-dozen blows to the ribcage when his opponent is tying up, trying to stall for time or a restart. Fodor’s that kind of fighter and will be fun to watch as he moves up the ranks.