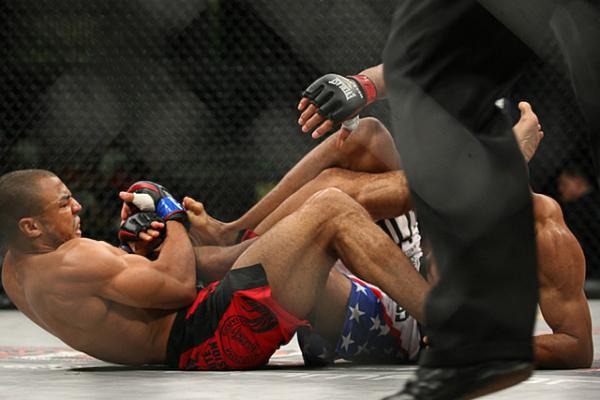 
Some awards are easier to decide on than others.

“Knockout of the Year,” for example, was virtually locked down from the moment Edson Barboza’s foot connected with Terry Etim’s face almost a full year ago.

However, every December, there seems to be a debate over the year’s top submission, and 2012 was no exception. Some members of our staff cast their vote for “The Korean Zombie” Chan Sung Jung and his brabo-choking of Dustin Poirier in the fourth round of our “Fight of the Year.” Others favored ground wiz T.J. Waldburger, who needed just 55 seconds to armbar Jake Hecht in a beautiful display of jiu-jitsu over wrestling. There were countless others to sort through: calf slicers, guillotines, keylocks and triangles. It speaks to the nature of the submission game, in particular, and MMA, in general, that such a diverse collection of finishes could be up for consideration in the same category.

In the end, Bellator Fighting Championships welterweight Karl Amoussou deserved “Submission of the Year” for his impeccable, tournament-winning finish of Bryan Baker at Bellator 72 in July. While Amoussou’s win was no upset, the way it ended could hardly have been more stunning. In fact, even the 27-year-old Frenchman didn’t see it coming.

“I didn’t really have a game plan,” said Amoussou, a self-described finisher who has stopped 13 of his 16 wins inside the distance. “Most of the time when I go into a fight, I just feel where I should go. If I’m stronger on the ground, I’ll make it go there. If I feel I’m better standing, I’ll try to keep it on the feet.”

With his experience in wrestling and judo, as well as proven knockout power, Baker is a tough opponent to find an advantage against. That’s not to mention the intangibles, like the fact that he had fought off leukemia less than two years prior or how he’d never before been submitted in 23 fights, the bulk of which came at middleweight. The oddsmakers may have pegged Amoussou as a slight favorite, but logic dictated that Baker was on his way to completing a storybook run.

Nonetheless, Amoussou exuded confidence in the opening moments of their July 20 bout in Tampa, Fla., bouncing in the center of the cage with his hands by his waist, pressing forward and inviting Baker to strike. When a push-kick from Baker knocked him down, Amoussou popped right back to his feet and was throwing punches even before he was fully vertical. 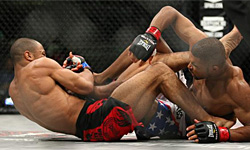 K. Mills/Sherdog.com
By the time Baker knew what
was happening, it was too late.
Then, as the 170-pounders exchanged leg kicks and continued feeling out their striking range, Amoussou caught a finger in his left eye courtesy of Baker’s outstretched hand. Referee James Warring paused the bout and called in the cageside doctor. Some fans in attendance booed. For a brief moment, things looked bad, but Amoussou says the bout was never in jeopardy.

“It wasn’t the biggest poke I’ve had in my career and I could start pretty fast after this,” recalled Amoussou, who needed only 40 seconds to recover. “It’s important to stay focused in every situation and I couldn’t let anything disturb me on that day.”

Seconds after the restart, Baker came forward in the southpaw stance, kicking his right leg toward Amoussou’s face. Amoussou dodged the foot and deftly swept Baker’s left leg with a low kick, turning the American around and allowing Amoussou to grab a rear waist lock. From here, most fighters would try for a suplex or attempt to secure control of the back and work for a rear-naked choke. Most fighters would, but not, as it turned out, Karl Amoussou.

“This is exactly what differentiates me from many fighters,” he explained. “I take risks, and this is why my fights are always spectacular and entertaining to watch. I want to finish the guy standing in front of me. I fight in a way that they never know from which angle I’m going to attack or what technique I’m going to use. I’m unpredictable.”

Indeed, Baker did not at first seem to comprehend what was happening as Amoussou dropped down and stuffed Baker’s left foot underneath his arm. By the time Amoussou leaned back -- his hands clasped together, wrenching the heel of the foot and the rest of Baker’s leg in the wrong direction -- Baker knew, but it was too late. It was a perfectly executed inverted heel hook, one that forced an extremely tough fighter to tap in less time than it will take most to read this sentence. That Amoussou pulled off the leg-mangling maneuver flawlessly is even more impressive after learning that he had never before finished a fight via heel hook.

“I started to train it two years ago in my former gym, Haute Tension, and was quite successful at learning it,” Amoussou said. “When I like a technique, I really work hard on it until it becomes almost perfect.”

The performance wasn’t over, however: as Baker remained prone on the canvas, Amoussou leapt to his feet and stood over his downed opponent. Cutting a hard-man pose and wearing an expressionless face worthy of his “Psycho” moniker, it would have been easy to mistake Amoussou’s actions as showboating. According to Amoussou, that was the last thing on his mind.

“I was already thinking about my belt,” he says, referring to the guaranteed title shot awarded to each of Bellator’s tournament winners. “I was thinking that I wouldn’t let anyone keep me from winning that belt.”

On Jan. 24, Amoussou will attempt to follow up the biggest win of his career with a victory over Bellator’s current welterweight champion, Ben Askren. It’s a curious matchup between all-action Amoussou and Askren, a collegiate wrestling star who has gone the distance in each of his last six bouts. If Amoussou has his way, the judges won’t be needed this time out.

“Askren is going to sleep or is going to be submitted. Wherever the fight goes, I’ll finish him,” he said. “He talked badly about French people, and I’ll make him pay for this. I’ll make him pay because everybody is tired of falling asleep watching his fights, and I’m sure most of the fans will be happy to see him go to sleep for once. And I’ll punish him just because he is boring and we need some action in that cage; I’ll make him look like a beginner.”

It sounds like someone is aiming to make next year’s award selection a little easier.