Sengoku 8: Worth the Watch
By Jake Rossen (jrossen@sherdog.com) Saturday, 10:50 p.m. ET: Unfairly dwarfed by announcements of ex-MLB whistle blowers potentially getting into heaps of cranial trouble in bizarre mismatches, Saturday’s Sengoku 8 card -- which aired stateside on HDNet from the Yoyogi National No. 2 Gymnasium in Tokyo, Japan -- was a stellar example of competitive prizefighting. Not a single clown car in sight.

The featherweight brackets shrunk from eight to four entrants as tournament favorite Hatsu Hioki tested UK opponent Ronnie Mann on the mat and found him lacking: Mann tapped to a triangle choke in the first round. Hioki repeatedly punching his defenseless face may have expedited the decision.

Nam Phan was upset by Michihiro Omigawa, who logged his second consecutive underdog win by tossing Phan to the mat and cradling his head so he could drive knees in. Phan composed himself long enough to land some body shots standing, but Omigawa was relentless, swarming him with punches for a referee stoppage in the first.

Striker Nick Denis and grappler Marlon Sandro switched roles, with Sandro clocking Denis with an uppercut and landing finishing touches on the ground. In the fight of the night, Chan Sung Jung was out-hustled by Masanori Kanehara, dropping a three-round decision. Compared to some of the more stilted ground contests we’ve seen, Kanehara and Sung Jung twitched and rolled like the mat was electrified. If you have time to sit for one fight, make it this one.

If you’re looking for the cringe factor, you’re better off with Travis Wiuff/Stanislav Nedkov, a fight that saw no less than four low blows landing on Wiuff’s (ineffective) groin protector in the first round. “My friend, no,” Nedkov laughed, either irritated by Wiuff’s crumbled form or apologetic about it. (Hard to read, those Bulgarians.)

Wiuff recovered enough to attain a measure of ground control, but Nedkov came out aiming higher in the second and put Wiuff away with strikes. Nedkov is ferocious, with powerful hips and good balance. One to watch.

In an easy highlight spot for the newsmagazine shows, Maximo Blanco auditioned for the LA Galaxy when he punted a downed Akihiko Mori in the head after dropping him with a right hook Mori was given the victory via disqualification, accepting both a trophy and a complimentary MRI. 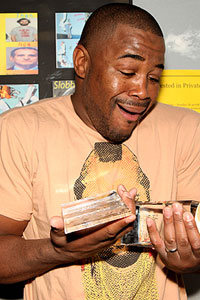 Dave Mandel/Sherdog.com
Evans embraces his hardware.
Friday, 11:00 p.m. ET: Rashad Evans’ training camp for his title defense against Lyoto Machida is in full swing in Albuquerque, N.M. The UFC light heavyweight champion was able to take a quick break from his hectic schedule to accept his Sherdog.com 2008 Fighter of the Year award. Evans also collected the Knockout of the Year award for his stoppage of Chuck Liddell last September.

The always-affable Evans succeeds 2007 winner and possible future opponent Quinton Jackson. Evans is set to defend his UFC title for the first time May 23 in Las Vegas.

Check the blog all day for more entries.