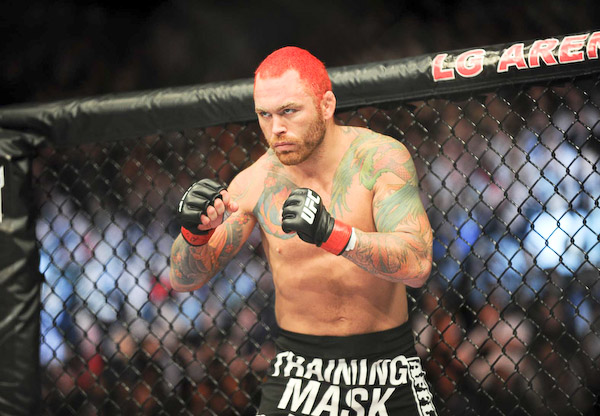 Chris Leben has dropped back-to-back bouts for the third time in his career. | Photo: Sherdog.com

After a hard sparring day, after shadowboxing, after the team shouts “Alliance!” to conclude practice, after a group photo, and finally, after a skip rope session, Leben walks out of the practice room into the weight area and sits on a tire to discuss his battles outside the 15 to 25 minutes he spends inside the Octagon. Fifteen months sober, he agrees his career has been one step forward, two steps back.

Ahead of his UFC 162 bout against Andrew Craig on Saturday at the MGM Grand Garden Arena in Las Vegas, Leben feels secure in his sobriety and more than ready to move on with his career.

“We’re told as men to suck it up, carry on, bury it,” Leben told Sherdog.com. “I did that for a lot of years. It didn’t work out. [Fighting] allowed me to continue that. I was caught -- cognitive dissonance, conflict of ideas, with my new way of being [sober], fighting being what I love. I think over the last year I’ve been able to marry the two well with finding my centeredness, wanting to self-reflect and better myself and also push my career.”

Earlier in training, Leben emphatically shouted into the gym’s ambient noise: “Gotta get that win back.” A teammate retorted: “Gotta get two wins.” Leben responded in jest: “Two wins? When is that going to happen?”

Call it Own Worst Enemy Syndrome, but Leben seems anxious that things are going so well right now. He feels inclined to subvert them, simply because that is what he is accustomed to doing. Part of the recipe for self-sabotage is being a lone wolf -- a term he uses to refer to himself over and over again. The proper order of operations under which Leben currently works is owed to Alliance MMA’s team-oriented environment, the accountability factor he believes he was always missing.

“Everyone here has been behind me so much,” Leben said. “I’m going to put everything on the line on Saturday night. I’m going to go out there and die in that cage because I’m not going to let this group of guys down. That’s the biggest thing.”

Leben transplanted to San Diego from Hawaii with his wife, Kaleena, so she could go to law school and he could have the right environment for his training. When the surf was up in Hawaii, sparring partners were harder to find. There were solid training partners in individual disciplines but not a full-time group of MMA fighters around which to plan a camp. He was also coaching more than he was being coached. Here, everything feels on point. The camaraderie at Alliance MMA established a foundation for a rare, genuine confidence in Leben.

“My mental toughness has been progressing,” he said. “When you come in here to spar on a Tuesday or a Friday, it’s no joke. I gotta gear up. I come in here getting ready to go to battle. If I’m sparring with Joey Beltran and he whacks me and knocks me down, that guy is jumping on top of me and he’s going to keep hitting me until the coach tells him to stop. That’s something I just didn’t have. Mentally, now, I know that I’m prepared. My last fight, I didn’t have that edge that I needed.”

Light heavyweight teammate Phil Davis concedes he keeps Leben in precarious positions with repeated takedowns and top game pressure to get the most out of him. After such sessions, he notes “the Crippler” thanks him -- a gratitude that has been one of Leben’s many positive contributions to the team.

“You know when a guy really doesn’t want to be pushed; he 100 percent does,” Davis said. “I’m just glad I can help him. He’s a guy I’ve been watching for years and love watching. The thing that people don’t know about these veteran fighters: like anything, once you’ve been around the block, he has all these tricks and all his tricks are painful.”

Leben believes this to be the best training environment he has ever experienced, superior even to the original Team Quest camp in Oregon, where he started his mixed martial arts journey. Alliance MMA appears to be an ideal starting point for his final run. The 32-year-old estimates he has three or four good years left in him and wants to go out with victories, all while looking like a fighter to be feared. Leben hopes consistency and excitement define his final days.

File Photo
Craig is 8-1.
A former World Extreme Cagefighting champion, Leben went sober for himself, but he admits the support system he has in place with his wife and team keeps him clean. He was always one to dwell on grief, questioning whether or not he deserved what was good in life. A Portland, Ore., native, Leben oftentimes felt one fight closer to hanging sheetrock than title contention and openly ponders how much of his potential he has actually reached.

“The one thing I have had to my credit is work ethic,” he said. “I’ve always worked hard and trained hard, but the other pieces were always missing: the mental aspect of the game, the sobriety. That’s a good question, and that’s what I want to find out. I don’t want to be Randy Couture fighting at 40-something years old, but I feel younger than I ever have. I feel better than I ever have. My body and my technique are through the roof right now.”

People often stop Leben on the street and praise him for his ability to absorb punishment, though he suggests maybe the time has come for him to be known as the guy who avoids getting hit.

No matter what path he takes -- that of the tactician or that of the slugger -- Leben knows he will need to be resourceful against Craig, a former Legacy Fighting Championship titleholder aiming to bounce back from his first career defeat.

“I’m honored to fight him,” Leben said. “Honestly, people say he doesn’t have that much experience. Well, from what I’ve seen, he’s pretty damn tough. He’s hard to put away. I’ve seen a lot of guys that thought they had the fight won and come back to lose to Andrew Craig. He’s a cockroach. He’s hard to kill. Cry in the dojo, laugh on the battlefield. I’m preparing for a 15-minute war with Andrew Craig.”

Leben considers himself a martial artist, a man dedicated to progress through learning. That is not the image for which he has been known since appearing on the first season of “The Ultimate Fighter,” where he stood out as a controversial, show-stealing lightning rod for his antics outside the cage. Much has changed in the past eight years. Buddhist philosophy appeals to Leben, and he recently spent a Sunday at the Deer Park Monastery “for a day of mindfulness.” The pursuit of happiness remains a work in progress, but Leben claims to be as content as ever in his newfound sobriety.

“You trade your nights for your mornings,” he said. “Sometimes nights are a little rough for me. I get anxiety, nervous. I come into the gym Monday [and] I hear a lot of great stories. I’m not part of those stories anymore. That’s something I’ve had to accept, yin and yang, give and take. I want my stories on Saturday night to be in the Octagon.”

Leben recounts sitting out for a year after a positive prescription painkiller test following his loss to Mark Munoz in the UFC 138 main event in November 2011. Forced to the sidelines, he realized he missed the sport.

“I had to have everything ripped from me: my finances, my livelihood, my job, my passion,” Leben said. “It was the best thing for me. God bless the UFC. They sent me to a month of rehab. I was able to use that as motivation and drive to turn things around.”

During that time, despite having more middleweight fights under his belt than any other man in Ultimate Fighting Championship history, Leben was broke. He returned the Octagon in December, losing a disappointing decision to Strikeforce import Derek Brunson at UFC 155. Leben was sober but nowhere near his current competitive level. He admits the last two years have been difficult, but he sees the hardships as a springboard for where he intends to go in the latter stages of his career.

“
The one thing I have
had to my credit is
work ethic. I’ve always
worked hard and trained
hard, but the other pieces
were always missing:
the mental aspect of the
game, the sobriety.

Adhering to Buddhist beliefs, Leben has come to realize that money is not everything. He quotes Willie Nelson’s “Tao of Willie”: “Drugs are God’s way of saying you make too much money.” Poor financial decisions, including wasting his earnings on booze and drugs, left Leben in dire straits. His regrets few, he considers it a hard lesson learned.

“Really, I don’t care, because I’m where I’m at now,” Leben said. “I’ve got the chance to make everything right. A lot of people don’t get that chance.”