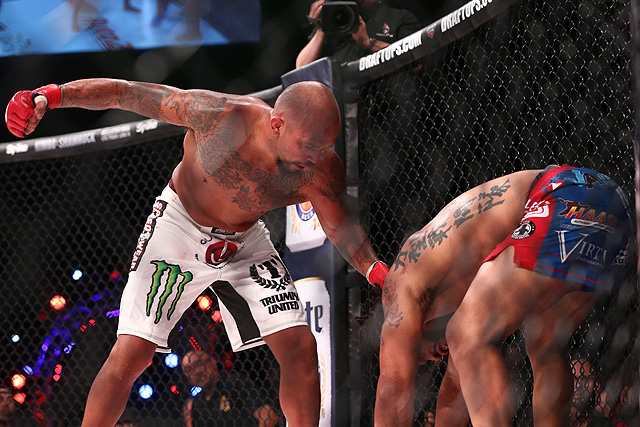 Joey Beltran likes what he has seen so far at 185 pounds. | Photo: Dave Mandel/Sherdog.com


One year ago, Joey Beltran’s mixed martial arts career was at a crossroads. He was coming off a knockout loss at the hands of Emanuel Newton and had just one win in his previous six fights. Something had to change. Beltran decided to drop from light heavyweight to middleweight, changing training camps and managers, as well. The moves paid immediate dividends, as he earned a majority decision over Brian Rogers in his 185-pound debut at Bellator 136 in April.

Beltran now hopes to throw his name in the hat of potential title contenders when he takes fellow Ultimate Fighting Championship veteran and “The Ultimate Fighter” Season 3 winner Kendall Grove in the Bellator 143 co-main event on Friday at the State Farm Arena in Hidalgo, Texas.

“After I lost to Newton, I did a lot of soul searching and went through some dark times,” Beltran told Sherdog.com. “I had my jaw wired shut for nine weeks. My wife wanted me to retire, and I really had to think on it. I knew if I was going to retire, I needed to give it at least one more try. I didn’t want to leave any questions unanswered, so I got new management and a new team. I found Tiki Ghosn and started training with him and [former Bellator MMA champion Brandon] Halsey, and everything clicked.

“[Ghosn] asked me if I could make 185,” he added. “When my jaw was broken, I was walking around at 200 pounds, so I thought I could cut 15 pounds of water weight. I knew I’d have to be disciplined to do it, but I had to do it. It was a black or white situation. I knew I was going to retire or go to 185 and try again. There’s nothing bad about losing 20 pounds of fat, especially when you’re trying be a pro athlete.”

Beltran admitted the move down to middleweight may not have made him that much more agile or faster, but his punching power and strength -- which have netted him 11 knockouts in his 16 professional wins -- have not been diminished by the loss of 20 pounds.

“Something people need to remember is that I’ve been in the gym with high-level 185ers and gotten the best of them,” the 33-year-old Beltran said. “People see me fighting at 205 and think I’m that much bigger than the middleweights, but it’s just because I was chubbier. Dropping to 185 was always in the back of my mind. When I finally did make the drop, my punching power and strength meant a lot more. I haven’t made a lot of leaps and bound in terms of speed and agility, but I’m able to do enough to keep myself out of bad positions. It’s more about strategy and doing the right thing. These guys at 185 aren’t going to knock me out.” 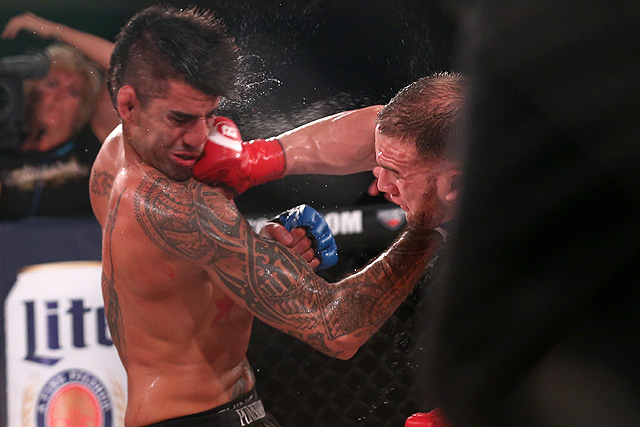 (+ Enlarge) | Photo: D. Mandel/Sherdog.com
Grove has lost five of eight.
Beltran and Grove are jockeying for position in a division where the current title sits vacant. Halsey, who was stripped of the championship after failing to make weight for his fight with Grove, is scheduled to take on Rafael Carvalho for the vacant title at Bellator 144 on Oct. 23. Beltran refused to rule out the possibility of fighting his teammate for the 185-pound crown should they both win their respective bouts.

“I mean, it’s up to the bigwigs,” Beltran said. “I think if I were to beat [Grove], I’d need to win one more and then discuss a title shot. There’s definitely fights to be made, but I already told [Halsey] if they offer me a lot of money, we’re fighting; but the money would have to be right. I wouldn’t fight him for $20,000. It’d have to be for the right money and under the right circumstances.

“We’d be professional about it and handle our business,” he added. “It’s not like we’re going to stab each other or anything. We’d just go in there and compete. We’ve both been doing this professionally for a long time. It is what it is. We’re both warriors. He is my homie.”

While Beltran comes into the fight with a win in his most recent outing, Grove finds himself on the rebound following a fourth-round technical knockout loss to Halsey at Bellator 137 in May. Grove owns a 2-2 mark under the Bellator banner and wants to make his way back into the title picture at Beltran’s expense.

“This is a fight I’m really excited about,” Beltran said. “I went to the University of Hawaii, and when I was out there, I remember hearing about him. I was a fan of his back then, and to be in this position is great. We both went to the UFC and had our ups and downs, but we always put on entertaining fights. I’m ready to get out there and put on a show for the fans. That being said, I always consider myself to be in a do-or-die situation. A lot of young guys want to come in and take our spots. I know what I’m fighting for, and he knows what he’s fighting for.”