Everyone answers to somebody, so we, the staff at Sherdog.com, have decided to defer to our readers.

“The Doggy Bag” gives you the opportunity to speak about what’s on your mind from time to time.

Our reporters, columnists, radio hosts, and editors will chime in with our answers and thoughts, so keep the emails coming.

Finally, don’t miss “Forum Talk Back,” where the death of Charles “Mask” Lewis, Ken Shamrock’s alleged positive steroid test and Rashad Evans vs. Lyoto Machida are commented on by loyal users of the Sherdog forums.

I'm just wondering if there's any way to register a complaint about the officiating of Yves Lavigne at UFC 96. This sport has waited since its introduction to gain mainstream popularity. Fortunately, we have yet to have a death occur inside the ring or cage, at least as far as I know. The job that Lavigne did in the Matt Brown-Pete Sell fight was terrible. MMA fans cringed the entire fight. Performances like his will lead to the first-ever death, which will mark the death of MMA in popular culture; that doesn't benefit any of us. If Lavigne is allowed to continue, I’m boycotting the events he refs. The UFC should be embarrassed. Thanks for letting me rant.
-- JD Reynolds 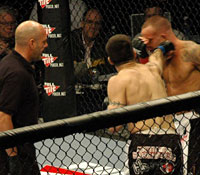 Photo by Sherdog.com
Once Lavigne stepped in,
it should have been over.
Brian Knapp, associate editor: No one with a brain disputes Yves Lavigne had a night to forget at UFC 96. His performance certainly left a lot to be desired, but to crucify someone with his track record for one mistake seems unjustified at best, criminal at worst. The punishment has to fit the crime. Lavigne has earned a reputation as a competent referee who deserves the benefit of the doubt.

The Brown-Sell fight should have been stopped long before Lavigne intervened, and because it was not, Sell was exposed to unnecessary risk. UFC President Dana White addressed the issue during a post-fight press conference, and though he criticized Lavigne, he also came to the referee’s defense. Lavigne recognized he made an error in judgment. He told the Canadian Press, “I did let Mr. Sell take maybe -- not maybe -- I let him take a beating for absolutely nothing. So I didn't do my job properly. So basically, I screwed up. I screwed up and I'm going to learn from it and try not to do it again. I'm going to make sure not to do it again."

Mixed martial arts suffered its first official fatality in 2007 when Texas-based fighter Sam Vasquez succumbed to his injuries after being knocked out by Vince Libardi at a Renegades Extreme Fighting show. Unfortunately, the specter of death and catastrophic injury looms large over the sport and always will, which is why referees are so important and why we can ill afford to lose the good ones. It’s inevitable, at least in my opinion, that Vasquez will not be the last casualty. I hope I’m wrong, but even if I’m not, I think MMA has grown deep enough roots to withstand such incidents.

Officiating needs to be improved, but referees face a damned-if-they-do-damned-if-they-don’t existence. The decisions they make are subject to intense scrutiny from fans, fighters, sponsors and promoters -- most of it in hindsight. They experience just as much ridicule for stopping a fight too soon as they do for allowing one to go on one punch too long.